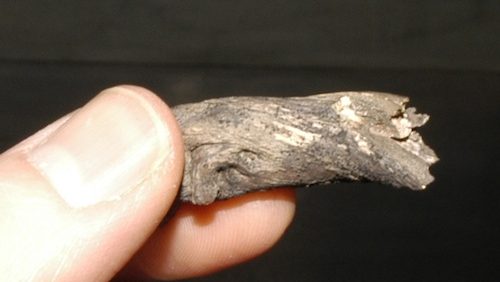 This was a 30 minute whirlwind of all canola diseases. We will have lots more on blackleg, sclerotinia and clubroot throughout the year. For now, here are a couple of interesting highlights from this station:

—Seed treatments are, for the most part, very effective against canola seedling diseases fusarium, pythium and rhizoctonia. But plant pathologists expect that continued tight canola rotations will select for seedling disease pathogens that will overcome these treatments. Tight rotations also mean more canola volunteers, which are not treated. These volunteer seedlings — and there are often lots and lots of them emerging — can provide a hospitable host for all seedling diseases. Even though most volunteers are eventually sprayed out, the damage may have already been done when it comes to building up the seedling pathogen population.

—Interesting fact about clubroot: Spore germination is not synchronous, meaning clubroot spores can germinate and infect canola roots in waves all through the season. Infection most likely to cause economic losses will occur early in the season, but root infection and gall formation can occur at any time through the season. One gall can produce billions of resting spores, so even if you don’t see damage for five years in a row, spore levels will still be building. When conditions are right for early infection, a field not seeded to a resistant variety could be wiped out.

—Blackleg is found throughout the entire province of Alberta and across the whole Prairies. Clubroot has the potential to spread throughout the entire province, and also possibly across the whole Prairies. Scouting for blackleg and clubroot is important in order to evaluate risk, and prepare a management strategy.  Integrating management tools (crop rotation, switching varieties to protect resistance, seed treatment and foliar fungicides) give effective, sustainable control of disease.

Assess canola diseases before harvest
Latest News
August 9, 2013 The week or two before swathing or during swathing are the best times to survey the disease situation in your canola fields. Large lesions — the ones that will lead to yield loss — are easiest to spot at this stage and when plants are still standing. And clubroot galls, if present,…
Seedling diseases in deep-seeded canola
Canola seeded too deep is at higher risk of seedling diseases. Deep seeding requires a long hypocotyl for the plant to reach the soil surface, which exposes more of the plant to soil-borne disease pathogens. Deep seeding also extend the days to emergence, which means the plant is at its vulnerable stage for longer. Other…
Top 10 diseases to look for in August
The time between now and harvest is an excellent time to look for diseases. Fungicide is not effective at this stage (for most diseases), but scouting and identifying diseases can help with management in following years. 10. White rust. Look for white pustules and a bend in the pod area — a telltale look that…
Station 7: Diagnostic tips
Station hosts: Murray Hartman, Alberta Agriculture and Rural Development Doug Moisey, CCC   The key messages from this station: —Keep an open mind when scouting a field for problems. Symptoms can have many causes, and it can be a costly mistake to jump to conclusions before considering all possibilities. Many probable causes were discussed ranging…