Home / Canola Watch / Top 10 diseases to look for in August 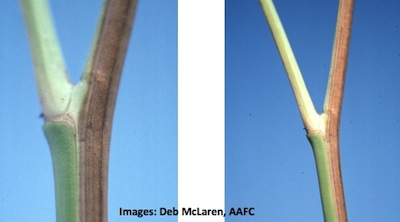 The time between now and harvest is an excellent time to look for diseases. Fungicide is not effective at this stage (for most diseases), but scouting and identifying diseases can help with management in following years.

10. White rust. Look for white pustules and a bend in the pod area — a telltale look that gives the disease the “staghead” nickname. This disease was common 15 years ago but has been virtually eliminated in napus canola through advancement in genetic resistance. You can still find it in juncea and rapa canola, and on stinkweed. Read more in the Canola Encyclopedia.

9. Fusarium wilt. This can cause bleached stems with a slight pinkish tinge typical of fusarium fungus. Discoloration can occur up only one side of a stem, a typical sign of fusarium wilt. Like staghead, this has been virtually eliminated through genetic resistance.

8. Grey stem. Grey stem, as the name suggests, can discolour a large portion of the stem. It can look like blackleg, but won’t have picnidia. Clipped stems may be hollow. Grey stem is less common than blackleg. It comes on later in the season and tends to have very little effect on yield. Read more in the Canola Encyclopedia.

7. Downy mildew. This was fairly common early this year, much worse than usual. Lesions tend to concentrate on lower leaves, with little impact on yield. Look for white powdery fungal growth on the underside of leaves, and scars on the topside with chlorosis around them. Read more in the Canola Encyclopedia.

6. Alternaria black spot. This tends to be more common in juncea and rapa canola. Black spots start lower in the canopy and move up the plant, eventually moving to pods. The disease can continue advancing after swathing. Lesions on leaves can look like blackleg, but do not have picnidia and seem to move out from the centre in concentric circles. Fungicide can prevent migration up the plant, but fungicide is rarely economical. At the end of the season, it acts a decomposer, producing football-shaped spots. Read more in the Canola Encyclopedia.

5. Root rot and foot rot. Root rot is caused by rhizoctonia, the same pathogen that causes wirestem in seedlings, and it tends to occur more often in fields with tight canola rotations. In severe cases, root rot will pinch off stems at ground level. Look for a conical shape at the break point. With foot rot, a fusarium disease, the lesions tend to be at the top of the tap root and move to the base of the stem. Foot rot lesions are tan brown to tan greyish and relatively smooth.  They may be on one side of the plant or girdle the entire stem base. Often you see concentric rings or markings on the lesions that likely correspond to periods of fungal growth/sporulation. Both root and foot rots tend to occur more often in fields with tight canola rotations. Clip stems above the break point: Clipped stems with root or foot rot will not have blackened tissue. Blackleg is a little more woody, rough and always black. A lab test will confirm ID and help you determine future management. Read more in the Canola Encyclopedia.

3. Clubroot. Pre-mature ripening can result from root rot, blackleg, sclerotinia stem rot and clubroot, but only clubroot will have the galls growing on the roots. Dig up plants to check. The disease has been confirmed in each Prairie province. Even plants without above-ground symptoms can have small galls. Pull a few random plants near field entrances to survey potential low-level clubroot presence in your area. Soil tests can also determine if the pathogen is present in field entryways.

2. Sclerotinia stem rot. Infection can cause lesions on leaves and stems. As stem infection progresses, stem lesions will move up and down the stem. Stems will become bleached and will shred easily when twisted. Only sclerotinia stem rot will have black sclerotia bodies inside infected stems. Read more in the Canola Encyclopedia.

1. Blackleg. Blackleg is not the worst canola disease on the Prairies (that honour goes to sclerotinia stem rot), but it ranks No.1 on this top 10 list to emphasize the need for growers to re-familiarize themselves with what could become the No.1 disease without close management. Look for lesions on leaves and stems with tiny black picnidia spots inside. Grey stem, sclerotinia and alternaria lesions will not have the black spots. Eventually infection will move to the base of the stem, at ground level. The surest way to identify blackleg is to cut stems with garden clippers to look for blackening and see the extent of damage. R-rated varieties should have minimal damage to stems. Extensive stem damage could indicate a shift in blackleg races in your fields. Read more in the Canola Encyclopedia.

Want to participate in a blackleg survey? A project under Growing Forward 2 will investigate the changes in blackleg populations and breakdown of resistance of canola cultivars in grower fields. This will be done in relation to the crop sequence, crop inputs and other resources in order to understand the reason(s) for the erosion of resistance in canola cultivars in canola fields. The five-year project is seeking 20-25 growers from each province to volunteer. The three researchers Dilantha Fernando (University of Manitoba), Gary Peng (AAFC/Saskatoon) and Ralph Lange (Alberta Innovates) will collect data and characterize the pathogen populations in each of these grower fields to understand population changes and make recommendations for mitigation of this emerging blackleg problem. The grower names, and land coordinates will be strictly confidential. The success of the project lies in the participation of the growers and is highly encouraged. If you wish to be part of or need more information, please contact Dr. Dilantha Fernando at 204-474-6072 or by e-mail at dilantha.fernando@umanitoba.ca

Diseases to look for while harvest scouting
Pre-harvest is a good time to scout for disease severity. Here’s what to look for: Sclerotinia stem rot —Look for areas in the field with lodged or prematurely ripened plants. —Examine the basal (bottom) to middle of the stem. Sclerotinia leaves a bleached or tan lesion on the stem. In serious cases, white, downy growth…
August 28 quiz
Create your free online surveys with SurveyMonkey , the world’s leading questionnaire tool. Answer: Blackleg, clubroot, sclerotinia stem rot. Blackleg lesions often have tiny black spots call pycnidia, but the best way to identify blackleg at this stage is to clip stems and look for black discoloration in the cross section. The only way to…
Pre-harvest scouting: 8 diseases
Check patches of pre-mature ripened canola before or during swathing to identify the cause. Use the Canola Diagnostic Tool at www.canoladiagnostictool.ca to help with the assessment. It could be blackleg, clubroot, sclerotinia stem rot or something else entirely. Growers can use this scouting information to plan rotations, choose varieties, and update fungicide decision-making for next…
Pre-harvest disease scouting: 8 diseases to look for
Diseases are usually easiest to see and diagnose in the couple of weeks before swath timing. Patches of dying or prematurely-ripening plants are obvious areas to scout (and show up really well with drone images), but even clean-looking fields can provide some early warning if you take time to look. Gather up your scouting toolkit…