Home / Latest News / Up close and personal with blackleg

A new video from the Canola Council of Canada zooms in on blackleg, showing how the canola disease infects a plant, how it spreads throughout a field, and what growers can do to protect blackleg resistance traits.

August 7, 2014– Disease surveys show an increase in blackleg incidence across the Prairies over the past few years. Canola growers may need to redeploy a more integrated approach to manage the disease.

“After 15 to 20 years of good control from resistant varieties alone, growers may have to implement other practices to protect canola yields and preserve the efficacy of genetic resistance on some fields,” says Clint Jurke, agronomy specialist for the Canola Council of Canada (CCC). “Growers and agronomists who may have forgotten what the disease looks like and how to manage it will have to rebuild their knowledge and experience base.”

The CCC launched a new video this week with vivid images to help growers understand and identify the disease. It explains how genetic resistance works, and how growing varieties with the same type of resistance in a short rotation increases the selection pressure for blackleg races that can overcome specific resistance genes.

“The video breaks new ground,” Jurke says. “It gives a microscopic view of how the pathogen produces disease, which is something we have not seen in video form before, and it explains the difficult concept of resistance breakdown.” The video, called “Blackleg Disease and Resistance Management,” is posted at www.youtube.com/canolacouncil. 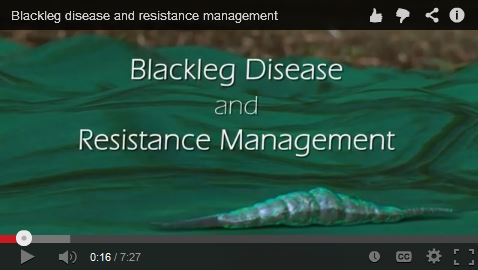 The video arms growers and agronomists with the understanding of the blackleg disease cycle and encourages them to assess the level of blackleg in this year’s canola crop. Pre-harvest scouting is an important step as growers need to be vigilant to ensure the disease is not becoming established in the field and if it is present, whether it is increasing in severity.

“This is the easiest time of year to identify the disease,” Jurke says. “By checking the average severity in a field, growers can determine whether their current management is working or whether they need to up their game.”

To scout, visit canola fields in the week or two before swathing or straight cutting. Pull up a few random plants and clip the stem just below ground level. Look for black discolouration of the cross section. A rating of “0” means no blackleg stem discolouration. A rating of “5” means the stem is completely discoloured and blackleg has killed the plant. A wedge of black that covers 26-50 percent of the cross section is considered a “2” on the severity scale.

Repeat this at a few sites within the field. If average severity is 1.5 or more, blackleg races in that field are likely starting to overcome the genetic resistance in that particular variety. Rotating varieties to bring a mix of blackleg resistance genes to the field over time can help prevent or delay the breakdown of resistance.

A key component of integrated pest management (IPM) of blackleg is to combine agronomic best practices and stewardship of blackleg resistance, if the disease is present in the field. “A two- to three-year break from canola on a high-risk field along with genetic resistance is recommended,” says Ralph Lange, plant pathologist with Alberta Innovates. “In that time, most of the infected canola residue will have decomposed, reducing the spores available to infect the next canola crop.”

Controlling volunteer canola and other Brassica weeds in all crops in the rotation will also prevent blackleg buildup, Lange adds.

Applying fungicides could also help — although research is ongoing to determine the best methods. Agriculture and Agri-Food Canada found no benefit to tillage or burning stubble for blackleg management.

Moisture raises sclerotinia stem rot risk
Latest News
July 3, 2013 Sclerotinia stem rot is the most common and costly disease of canola on the Canadian Prairies, and its severity is directly related to moisture. If a field has regular rains or high humidity or both from two weeks before flowering and through flowering, then infection will occur. “If rain or humidity continues…
Begin your pre-harvest disease watch
Latest News
July 23, 2014– Yield-robbing levels of disease will be easy to spot in canola fields now and through to harvest. This is a great time to start your pre-harvest disease scouting. “Knowing what diseases you have at the end of the season is the only way to know how successful your disease management strategies have…
Get a global perspective on clubroot management
Latest News
April 22, 2013 Western Canadian canola growers are not alone in their fight against clubroot. The brassica plant disease is present around the world, and clubroot management is a global effort. The Canola Council of Canada (CCC) and Agriculture and Agri-Food Canada (AAFC) will bring together a global network of leading researchers and academics to…
Blackleg
Blackleg is a serious disease of canola across all canola growing areas. Field scouting and accurate identification of the plant symptoms is required to diagnose this disease. Blackleg requires an integrated management strategy utilizing the best agronomic practices to minimize yield loss and maintain the effectiveness of genetic resistance in canola cultivars. Blackleg Management Guide…