Canola harvested in very hot weather has to go on aeration to cool it off. Even if dry, hot canola can start to heat and spoil within weeks.

Canola at 10% moisture is at risk of spoilage when put in the bin at 20 C. “At temperatures above 30 C, which was the harvest temperature for a lot of canola binned over the past couple weeks, the spoilage risk is that much greater,” says Kristen Phillips, agronomy specialist with the Canola Council of Canada.

Even canola binned at moisture contents below 8% may still be at risk at these high temperatures, Phillips adds.

All canola should be conditioned immediately after harvest. “Conditioning” involves the movement of air through seed to ensure safe storage over a period of time. The basic recommendation is to put canola into aeration bins immediately after harvest and turn the fans on until canola has cooled to 15 C. If aeration bin space is not available, keep moving the canola from bin to bin until it cools.

“The act of augering canola from one bin to another will circulate air through the seed, cool it off and remove any developing hot spots,” Phillips says. “In fact, this practice is also useful for canola that has been on aeration. Moving canola after a couple weeks on aeration adds another level of security to make sure the highly valuable crop is safe.” 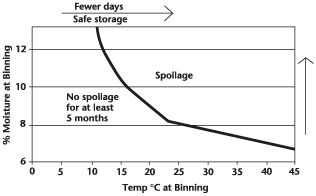 If growers are concerned about the safety of canola binned hot or tough or with high green counts, they may want to consider early delivery to the elevator or crush facility. Check your options.

“The first 4 to 6 weeks after putting the canola in the bin is the most critical time,” Phillips says. “Don’t forget about your stored canola while tending to your other harvest duties. It could be a very costly oversight.”

Media can contact a Canola Council of Canada agronomy specialist in your region:

This media release is supported regionally by:

Check all bins of stored canola
Latest News
October 10, 2013 Neglected canola bins are at greatest risk. All canola should be conditioned right after harvest, and checked at least a couple of times in the first four to six weeks to make sure the temperature is cool and stable. “The safest bet is to assume that all canola is at risk. To…
Spring warm up for stored canola
Latest News
Canola to be stored on farm through summer will be safer if warmed up before outside temperatures get hot. “The goal is to reduce the temperature differential between stored canola and the outside air,” says Angela Brackenreed, agronomy specialist with the Canola Council of Canada. “This reduces the amount of moisture movement within the bin,…
Got canola with green seed?
Latest News
Thursday, October 13, 2011 If you’re waiting for green seed counts to drop before combining canola, or if you have canola with high green seed counts sitting in a bin, quick action may be your best financial move at this stage of the season. Growers waiting for green seed levels to drop before combining should…
What takes priority, seeds or weeds?
Latest News
Canola growers will want to get the drills moving this spring as soon as the snow has cleared and the fields can support equipment. But even though seeding has started later than usual, early weed control remains a high priority. “Without good weed control, the economic benefits of top seed genetics and high fertility rates…