Seeing blanks up canola stems where pods should be? Here are the seven most common causes:

Heat. Hot days (28-30°C and up) coupled with warm nights (16°C and up) from bud to mid-flowering stages can have a significant effect on canola yield. Cool nights offer some recovery from hot days. Warm nights do not provide a recovery period, and more flowers are aborted, producing blanks along the stem. Even with a few days of heat, it can take a week for hormone balance and regular pod formation to return. Most years, seeding early so canola flowers during cooler parts of the summer is an effective strategy for higher yields. Recently opened flowers with shortened stamens that don’t protrude above the petals can be a sign of heat damage. Click here to see Murray Hartman explain how heat affects canola reproduction. Hot weather and flowering. Any treatments?

*Are you trying a treatment on heat-blasted canola flowers? Read more. Consider leaving a few check strips to see if the rescue treatment pays off. Follow the UCC field trial protocol.

Drought. Moisture stress during reproductive stages can cause a hormone imbalance that disrupts pod formation and seed set. In a drought, canola plants will progressively drop later flowers at the top of the main raceme and on branches, and put energy into preserving the pods it has. In late season drought during pod fill, seeds that do form may germinate in the pod due to the hormone imbalance. If moisture returns, plants can start preserving flowers again, resulting in a stem with pods at the bottom and top but nothing in the middle. Additional symptoms of drought include leaf wilting, and flowers with smaller petals that may be off-colour (pale or yellowish-orange), or flower buds that die before fully opening.

Late off-label applications of herbicides and spray tank residues or drift can damage buds and flowers, resulting in blanks. For example, glyphosate applied after the 6-leaf stage on Roundup Ready canola may result in pale petals of normal size and short stamens that don’t protrude above petals in recently opened flowers. An application of glufosinate after the 6-leaf stage could shorten plants because more energy is required to metabolize the herbicide. Reductions in yield can also occur because of the energy trade off of metabolizing a late application. There can be significant pod sterility and blanks as a result. Higher rates than allowed on the label can also increase the yield loss. Look at sprayer misses or overlaps for differences to confirm this diagnosis. Read more.

Male sterility. The F2 generation (volunteer plants) will have the maximum amount of variability, resulting in up to 25% sterility. In some HT systems, there will be loss of herbicide resistance, and extreme variability of traits such as height and maturity. This is why it is not advisable to seed bin run canola that was grown from a hybrid (in addition to the legal ramifications). A very small percentage of plants in hybrid canola may be male sterile as it’s difficult with any system to have 100% hybridity at all times. Male sterile plants require cross pollination from neighbouring pollen-producing plants, and as a result will produce fewer pods and many blanks. Male sterile plants often tend to stick up above the rest and are scattered throughout the field at low numbers. This can make the situation look worse than it really is. Male flowers will not have evident stamens on recently opened flowers.

Boron deficiency can reduce fertilization, leaving blanks up the stem. Plants with boron deficiency will often flower longer to compensate for poor seed set or may not flower at all, and may have leaf blotches ranging from pale yellow to reddish purple. Boron deficiency symptoms will show up in the younger leaves and growing points because boron is not mobile in the plant. Boron deficiency tends to be location specific, with only patches of the field (usually sandy areas) showing blanks. The challenge with boron is that application studies on the Prairies have not shown significant or reliable results. Boron may only cost $6 for the full rate, but third party studies, including UCC, have not shown a predictable yield benefit. Note that applying high rates of boron can result in toxicity.

Insects. Lygus bugs and diamondback moth larvae feed on buds, killing them. They may only kill a few buds per cluster, so the plant produces pods here and there up the stem. Dark stains on flower petals and shriveled brown pedicels are signs of insect feeding on buds. (Pedicels will be intact after heat or drought damage.) Swede midge also damage flowers and bud clusters, resulting in missing pods and densely clustered pods on shortened racemes — a “bouquet” or “witch’s broom” appearance. At flowering, a canola plant’s response to the first bit of insect damage is to produce more flowers and try to set more seed. In this situation, plants can even “overcompensate” for a small amount of insect feeding with increased yield. Learn your “good bugs” and insect thresholds. Insecticides are not always required.

What about heavy rain and heavy wind? While these aren’t included in the top 7, Murray Hartman says: Heavy rain could reduce pollination in recently opened flowers and cause fewer seeds per pod in those flowers. High winds could damage the bolting stem and the plant could have hormone changes that help the stem recovery but at the expense of flower and young pod survival. Heavy rain more likely causes temporary ponding or soil saturation that initiates a flooding stress response which then affects flower / pod survival.

While out scouting for missing pods…

While checking canola crops for missing pods and other signs of heat stress, take a closer look at patches that seem to be wilting more than others. Heat and drought stress can accentuate other stresses, including clubroot, root maggot and other root problems. Plants that seem more stressed than other could have these other problems. What’s going on with the roots?

Canola can compensate for lost flowers 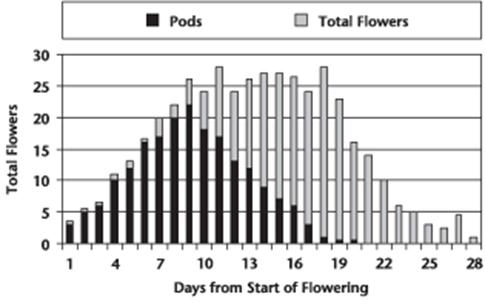 Canola can lose flowers to many stresses, including insects, heat, heavy rain, and late herbicide application. Canola plants that lose flowers can recover without a yield penalty — or not much of one — if conditions improve by early to mid flower. The chart above shows that canola plants produce far more flowers than pods, providing a cushion to compensate for flower loss early. The plant can utilize the later flowers if needed. If not needed, these late flowers won’t likely amount to much.