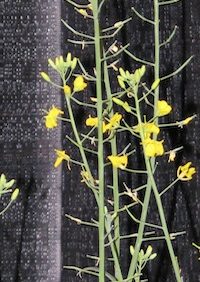 Heat. Hot days (28-30°C and up) and warm nights (16°C and up) from bud to mid-flowering stages can have a devastating effect on canola yield. Cool nights offer some recovery from hot days. Warm nights do not provide a recovery period, and more flowers are aborted, producing blanks along the stem. Even with a few days of heat, it can take a week for hormone balance and regular pod formation to return. Most years, seeding early so canola flowers during cooler parts of the summer is an effective strategy for higher yields. Recently opened flowers with shortened stamens that don’t protrude above the petals can be a sign of heat damage.

Drought. Moisture stress during reproductive stages can cause a hormone imbalance that disrupts pod formation and seed set. In a drought, canola plants will progressively drop later flowers at the top of the main raceme and on branches, and put energy into preserving the pods it has. In late season drought during pod fill, seeds that do form may germinate in the pod due to the hormone imbalance. If moisture returns, plants can start preserving flowers again, resulting in a stem with pods at the bottom and top but nothing in the middle. Additional symptoms of drought include leaf wilting, and flowers with smaller petals that may be off-color (pale or yellowish-orange), or flower buds that die before fully opening.

Late off-label applications of herbicides and spray tank residues or drift can damage buds and flowers, resulting in blanks. For example, glyphosate applied after the 6-leaf stage on Roundup Ready canola may result in pale petals of normal size and short stamens that don’t protrude above petals in recently opened flowers. There can be significant pod sterility and blanks as a result. Late applications may also use higher rates because weeds are bigger, which increase the yield loss. Look at sprayer misses or overlaps for differences to confirm this diagnosis.

Male sterility. Up to 15% of volunteers and plants from bin run seed can be male sterile. These plants require cross pollination from neighboring normal plants, and as a result will produce fewer pods and many blanks. Male sterile plants often tend to stick up above the rest, and are scattered throughout the field at low numbers. Male flowers will not have evident stamens on recently opened flowers. Sulphur deficiency can reduce pod and seed set. Look for stunted growth, light-coloured leaves on newer leaves vs older leaves, purpling and cupping on stem leaves during bolting, and pale, smaller flower petals, especially on hill tops where S deficiency tends to be more common. Stamens will protrude normally on S deficient plants.

Boron deficiency can reduce fertilization, leaving blanks up the stem. Plants with boron deficiency will often flower longer to compensate for poor seed set, and have leaf blotches ranging from pale yellow to reddish purple. Boron deficiency tends to be location specific, with only patches of the field (usually sandy areas) showing blanks.

Insects. Lygus bugs and diamondback larvae feed on buds, killing them. They may only kill a few buds per cluster, so the plant produces pods here and there up the stem. Dark stains on flower petals and shriveled brown pedicels are signs of insect feeding on buds. (Pedicels will be intact after heat or drought damage.) Swede midge also damage flowers and bud clusters, resulting in missing pods and densely clustered pods on shortened racemes — a “bouquet” appearance.