UCC field-scale trials in 2016 and 2017 compared the farmer’s base nitrogen rate with a rate 25% higher. For example, if the farmer planned to use 100 lb./ac., the trial included replicated strips of 125 lb./ac.

Over the two years, 15 site-years were harvested and met protocol standards.

Results:
–With all site years averaged, adding extra nitrogen did provide a statistically significant yield response. Overall, yield did go up.
–Some sites showed a non-significant yield difference.
–Even with a yield increase, the increased nitrogen did not always provide an economic return when compared to the base rate. 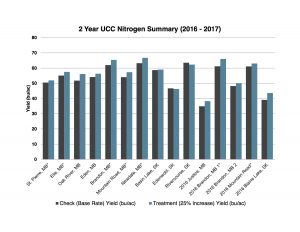 For background numbers for this table and more UCC results: UCC results poster

@CanolaWatch ran a Twitter poll to test three ideas the UCC team had for 2018. The choices were: ESN/controlled-release N; potassium; seed-placed P; and “other”. With “other”, we did get some very good suggestions, but 42% of respondents chose the ESN/controlled-release N option and 34% chose seed-placed P. UCC will likely run with one or both of these trials for 2018. For more on UCC, go to ultimatecanolachallenge.ca. To participate in 2018, email Nicole Philp at philpn@canolacouncil.org. 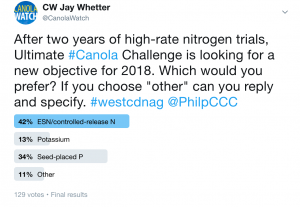 Ultimate Canola Challenge 2018: Seeding speed trial
Ultimate Canola Challenge 2018 is for growers interested in learning how to better target their seeding speeds to improve profitability and risk management in their canola crops. Trials will include the grower’s base seeding speed and strips at 1 mph slower and 1 mph faster than the base. Each strip will have plant counts done…
Plan your on-farm research trials
Farms can run their own strip trials to test how a particular practice or product performs in a local environment – and this is a good time to make a plan. A strip trial could test, for example, the difference between 60 pounds and 120 pounds of nitrogen fertilizer per acre, or between acres treated…
Run a UCC on-farm trial in 2018
Ultimate Canola Challenge will run fertilizer trials in 2018. The focus and protocols have not been finalized yet, but farmers interested in participating can email Nicole Philp at philpn@canolacouncil.org. By participating, farmers get help to run protocol-based trials that align with scientific methods. UCC collects results from participating farms and shares the information to expand…
Ultimate Canola Challenge: 2015 results, 2016 plan
Results from the 2015 UCC trials are posted. In 2015, various boron treatments were evaluated in small plot and large plot trials across Western Canada. Combined with two years’ of previous UCC trials that included a boron treatment, it was concluded that there was no consistent yield or quality difference between untreated checks and boron…