Home / Canola Watch / Are you stoked for storage? The first few days in the bin could make all the difference 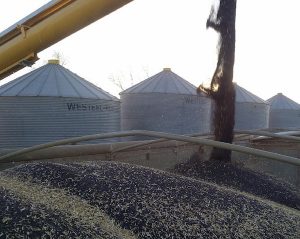 All canola should be conditioned shortly after it goes in the bin. Canola that goes into the bin hot is at much higher risk of spoilage, and conditioning will reduce the grain temperature. It will also help to dry down dockage, which may have higher moisture content than the seed. Note that straight combined canola may have “greener” dockage, which could add to the storage risk. Movement of air through conditioning will also help remove moisture from this dockage.

The first four to six weeks after putting the canola in the bin is the most critical time. Storage risk is reduced significantly when canola moisture is 8% or lower and temperature is 15°C or lower. READ MORE

If it has been hot and dry while harvesting be sure to cool that grain fast. Canola binned hot, even if it has low moisture, low dockage and low green, should still be put on aeration. Target a core temperature of 15°C at harvest time, and watch throughout the winter to make sure it doesn’t start to increase. External temperatures moving from hot to cool in a few days create perhaps the worst situation for safe canola storage. A wide temperature differential between hot grain inside the bin and cool air outside sets up strong convection patterns in the bin. Moisture will be moving and concentrating at the top of the top middle core of the bin.

If it is looking like it may be a wet harvest be sure to dry anything above 10% moisture. Natural air drying — your standard aeration fan — should do the trick if the air is warm with low humidity and if canola moisture is just a point or two above 10%. A dryer may be required for canola above 12%. Keep in mind that a bin’s average moisture might be dry, but a couple tough loads could have gone in, or small areas within each load may have been harvested from weedy slough patches and have higher moisture and higher dockage. These small pockets of moist grain and dockage could create a start point for heating

If you’ve been dealing with cereals lately, remind yourself how different canola storage is. Canola contains approximately 44% oil, which makes it much more volatile in the bin than cereal crops. Consider conditioning your canola, even if this wasn’t required for your cereal grains, and check your canola bins on a regular basis.

If you have been straight cutting your canola there is a chance of elevated green seed and/or pockets of high moisture within the bulk material. Condition it immediately after binning, even if the canola is largely dry and cool.

If you ended up harvesting much sooner after swathing than expected be sure to turn on the fans for the first couple days to condition the canola. There is observational evidence that canola which has quickly cured in the swath is more prone to volatility or heating in the bin. This could potentially be due to the degree and rate of respiration being higher, which has also been hypothesized for canola that is straight cut. Even if this isn’t the case, the first 24 hours of conditioning remains critical to stabilize the bulk.

Always ensure you are safe when handling grain.

If you’re still waiting to start harvest there are several useful items to check off you list before you fill those bins, listed here.

Warm winter days can increase storage risk
Moisture migration in a canola bin peaks when the temperature difference between inside and outside the bin is high. For example, if canola in the bin is -10C and the temperature outside is -30C, air movement inside the bin will be more active than when the difference is smaller. Same if canola in the bin…
Condition all stored canola within days
All canola should be conditioned after harvest – even if it has limited risk factors. Turning on aeration fans shortly after harvest will remove any moisture that has respired from the seeds – which commonly occurs after harvest. Aeration also cools the grain and evens out the temperature. Both of these “conditioning” steps can reduce…
Condition canola immediately after harvest
All canola should be conditioned shortly after it goes in the bin. Canola that goes into the bin hot is at much higher risk of spoilage, and conditioning will reduce the grain temperature. It will also help to dry down dockage, which may have higher moisture content than the seed. Note that straight combined canola…
Storage: Hot canola is at risk
Canola binned hot, even if it has low moisture, low dockage and low green, should still be put on aeration. This will even out the temperature throughout the bin and help remove moisture from respiring seed. Even at low moisture, convection currents within the bin could concentrate this moisture. For safe, long-term storage, canola should…