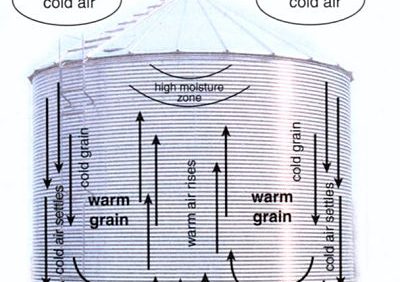 Sometimes a quick scan of the bin roofs can provide a indicator. If most bins have snow on them, while some do not, that could be a sign that there is variation between bin temperatures. The best way to check is with temperature cables, or by removing at least one third of the canola in a bin. Probes can also work to check the top or bottom of the central core, which is where heating is most likely to begin. However, heating can also start in pockets of dockage along bin walls — where probes cannot reach.

The key is to check. While canola that is dry and cool is at lower risk, dockage and green seed can add to heating risk. Often the bins growers thought were safe are the ones that heat — perhaps because they aren’t checked as frequently as higher risk bins.

Factors that increase canola storage risk
Factors that increase the risk of spoilage for stored canola are high moisture, high temperatures, green seeds and dockage. This article describes these major factors and others. All canola should be conditioned immediately after combining to cool it down, even out the temperature throughout the bin and remove any moisture released through natural seed respiration…
Are you stoked for storage? The first few days in the bin could make all the difference
All canola should be conditioned shortly after it goes in the bin. Canola that goes into the bin hot is at much higher risk of spoilage, and conditioning will reduce the grain temperature. It will also help to dry down dockage, which may have higher moisture content than the seed. Note that straight combined canola…
Warm spells put stored canola at risk
Some growers have noticed temperatures creeping up in their canola bins the past few days. They have turned on aeration fans to cool the bins back down. With a generally warmer winter, canola may not have cooled down throughout the core as much as it would have with prolonged cold. When the central core does…
Weeds, green, heat increase storage risk
Weed seeds. Weed seeds tend to contain more moisture than canola seeds, especially if they are green or immature. These high-moisture seeds may not be enough to elevate overall grain moisture tests, but if these weed seeds congregate in pockets in the bin they can create localized hot spot for spoilage to begin — especially…