Home / Canola Watch / Watch for jimsonweed and other strange weeds 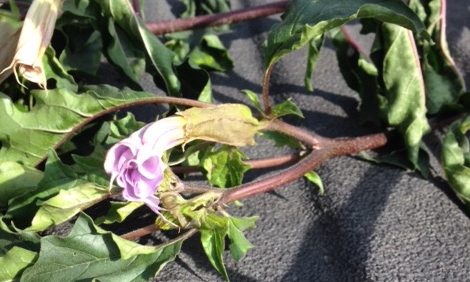 Weed management includes a keen eye for the unusual. “Unusual” can be suspicious patches of common weeds (herbicide resistance?) and presence of new unknown weeds.

Jimsonweed is, for many, an usual and unknown weed. It was reported in several Alberta canola fields a couple weeks ago, and has now been confirmed in fields in 11 Alberta municipalities.

Jimsonweed (Datura stramonium), also known as devil’s trumpet, is a naturalized annual herb found across most of southern Canada. It thrives in hot climates where soils get very warm. While it is currently listed as one of the 21 prohibited noxious weeds on the federal weed seeds order, the Canadian Food Inspection Agency (CFIA) has proposed re-classification from prohibited to primary because it is already found in many parts of the country. It is a designated noxious weed on the Manitoba Noxious Weeds Act but presence on land is not regulated by the Saskatchewan or Alberta Weed Control Acts.

If you find jimsonweed or any other unusual weed, contact a provincial weed specialist or CCC agronomist to help with identification and discuss containment and management strategies.

Council clarifies concerns around appearance of jimsonweed
Latest News
September 3, 2015 – Growers and agronomists are encouraged to keep an eye out for jimsonweed, however health concerns around potential toxicity in canola oil are unfounded. “While jimsonweed itself can be poisonous, the heating process in canola oil and meal processing denatures toxic alkaloids, so there isn’t a health concern in processed canola products,”…
New glyphosate-resistant weeds moving north
Tall waterhemp is confirmed in eastern Manitoba. Palmer amaranth is in North Dakota and moving north toward Manitoba and Saskatchewan. Both are big aggressive weeds with populations resistant to many herbicides, including glyphosate. If you find them, destroy them immediately. Tall waterhemp and palmer amaranth are both pigweeds; relatives of other more common pigweeds such…
Check suspicious weeds for herbicide resistance
Surviving weeds are growing strong and some of them — like kochia and wild oats — start to look really obvious by this time of year. Are those patches herbicide resistant and to what? Or are they just escapes? Here are clues to distinguish between the two options: Herbicide resistant weeds tend to: —Be in…
Top 10 weeds to watch for this fall
10. Toadflax, biennial wormwood, scentless chamomile, narrow-leaved hawk’s-beard and stork’s bill are lumped together because they should be on the list, but did not make the top nine. 9. White cockle. This weed is not widespread across the Prairies, but it is awful where found in central and northern Alberta, and seems to be getting…