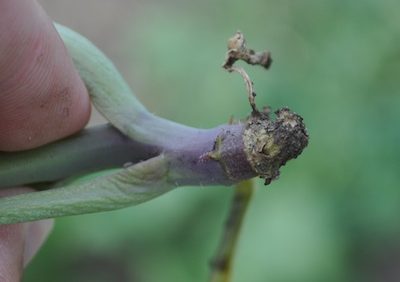 Foot rot and brown girdling root rot (BGRR) seem to be more common this year. If you see dying plants or plants with lower leaves dying off while other plants remain green, this may indicate abnormal root function. Purpling of the stem base and leaves could be an indicator of root disease (and many other stresses), but most stems with BGRR infected roots show no purpling at all, so that is not a true indicator. Dig up problem plants and check the roots for rots and girdling.

Growers can’t do anything about these diseases at this stage of the season, but one agronomy question that comes up is whether infection can spread to healthy plants beside diseased plants. This is unlikely. Infection that causes yield loss sets in early — at or just after the seedling stage — and if plants are healthy today, they are unlikely to get yield damaging levels of infection.

Look at the stems. Healthy-looking plants may have some pinching starting, which could lead to yield loss eventually. If no pinching, then BGRR or foot rot is not a yield risk for those plants. While scouting, look around for cutworms and root maggots to rule out these insects as possible causes for the damage. Note that while maggot damage often leads to root rot, the symptoms may or may not be typical to BGRR specifically, which has reddish brown to brown, sunken girdling lesions.

Canola roots at adult stages may also have brown girdling root rot (BGRR), a similar infection caused by the complex of Rhizoctonia, Pythium and Fusarium. Symptoms of BGRR are rusty brown lesions on the canola tap root, which may girdle and pinch off the root if severe. These diseases can be much higher in tight canola rotations. (See the July 16 Quiz for more on identification and how to tell it apart from other diseases.)

Heavier textured clay soils with waterlogging earlier in the season are more likely to have BGRR and foot rot. BGRR is more prevalent in the Peace region, probably for a number of reasons: Heavier textured soils and more acidic soils in the Peace are more favourable to BGRR. BGRR is more common in Polish canola, which had been grown more widely in the Peace. Many diseases, including these root diseases, are more common in tighter canola rotations. And pythium — one species in the BGRR complex — tends to prefer cold, wet soils. BGRR has been reported at other locations, including near Edmonton, and specimens collected by AAFC at Saskatoon also had typical BGRR symptoms.

Root rot scouting
If you see dying plants or plants with lower leaves dying off while other plants remain green, this may indicate abnormal root function. Purpling of the stem base and leaves…
Look out for foot rot: Consider rotations
Rhizoctonia infection at the bolting and flowering stages of the season can cause roots to pinch off at the crown — which is right around ground level. Roots will also…
Give the plants a mid-season root check
While scouting canola fields at flowering and podding stages, dig up a few plants in each field and look at the crown and primary root. If the crop has above-ground…
Root rot
The root rot complex is mainly caused by three types of soil-borne pathogens which affect the roots of adult plants. The disease symptoms are potentially serious, and the incidence, as…