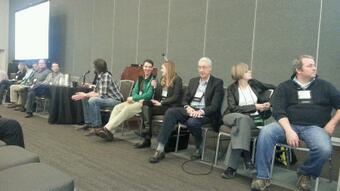 The Canola Council of Canada agronomy team along with guests Murray Hartman, Scott Meers, Mike Harding, Cindy Grant and John Heard presented a live version of our Canola Watch conference call at FarmTech 2014. @DocCamiRyan, who will be speaking at the CCC Convention in San Antonio later this month, took our photo (see above) and tweeted that it was the record longest panel.

The discussion included talk about crop rotation, swede midge, bertha armyworm thresholds, pollinator protection, and how to effectively use your smart phone and camera for accurate long-distance diagnostics.

We also went off on a tangent about fertilizer plans heading into 2014. Moderator Jay Whetter asked the panel, “If growers are looking to increase (or trim) fertilizer investment by $10 per acre in 2014, what should get increased (or reduced) first — nitrogen or phosphorus?” Murray Hartman answered with “potassium,” noting that many growers were spending money on K fertilizer even though it rarely generates increased canola yield.

Topics for the month
Canola fertilizer management and rotation management have been hot topics this spring. We’re going back to the basics for fertilizer, with a review of the 4 Rs, and a description of the three most important goals with a canola crop nutrition strategy. The rotation article provides an overview of the science behind canola rotations and…
Topics for the month
Growers still looking for some independent data to help with their final canola seed decisions this spring can try out the new selection tool to utilize the Canola Performance Trial variety comparison data online. Some growers may be tempted to seed extra early. Early seeding usually improves canola yield potential and quality, but these benefits…
Topics for the month
We have moved into fall and winter mode, with Canola Watch coming out once a month from now on until late April or May — depending on when field work starts next spring. The focus for the next 7 months will be on events coverage, science reports, storage issues, and planning for next year. Also…
Topics for the month
January is show time. You can find Canola Council of Canada agronomy specialists at AgDays, CropSphere, Crop Production Show and FarmTech this month. January is also when growers often research and pencil out their final plans for the upcoming crop year. See our crop rotation and crop nutrition articles below for some added guidance. Big…