Home / Canola Watch / How to use photos for agronomy 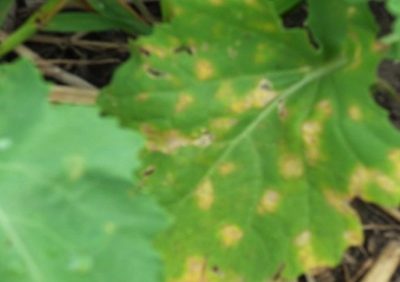 Crop diagnostics often come down to good photography skills, especially since so many people have smart phones with cameras, and since agronomists cannot get to all fields in a timely manner.

The rules to agronomy by phone and photograph are:

1. Keep an open mind. Don’t have a pre-conceived notion of what the problem is, and try not to convince the agronomist or other diagnostician what you think the problem is before the diagnostician has a chance to assess the facts. One symptom can have many causes, and an issue confined to a few plants in a corner of the field may not be worth the management effort.

2. Focus on focus. Take a look at the photo on a large screen before you send it. Zoom in. Is it sharp? All cameras are challenged to take sharp close ups, especially when the subject is small and the lens is 2” away. Choose the camera’s “macro” setting if you have that option. It is better to back away from the insect or lesion or weed a few more inches to achieve good focus. The subject may be smaller in the view finder, but if the focus is better, the agronomist/diagnostician receiving the photo can zoom in for a better look.

3. Cover the angles. Top. Side. Front. Back. Close up. Mid-range. And Long range – if an overall field shot seems useful, as it could be with spray efficacy or seeding issues. If shooting leaf damage, photograph the topside and underside of leaves. For weeds in particular, take pictures of as many parts of the plant as possible – roots including any perennial parts, flowers, inside the flowers, outside the flower and not just the coloured showy bits, a leaf by itself and attached to the plant, where the leaf attaches to the plant, the stem, close up of hairs, and with grasses pull back the leaf away from the stem and take a shot of the collar region so that ligules and auricles are visible. Flower shots should be able to show petals, sepals (bud leaves) anthers and pistil. Pull off some petals and sepals to show if the ovary is inferior or superior. Not all weeds can be identified by leaf shape alone.

4. Use a size reference. Include a ruler, coin or pen in the image so the viewer has a clear idea of the subject’s size.

5. Provide context. Describe how an insect moves, what the feeding looks like, where in the field it’s found, and crop staging. Describe disease lesions in detail, including location on the plant, colour, shape and whether there are spots inside the lesion. Include field details, such as crop rotation, pesticide history, fertilizer use, soil analysis results, neighbouring crops and the moisture situation. Note the crop where the subject was found (and where on the plant was it found), location of the field (legal location or GPS if possible), name of the person who collected the sample or took the photo, and the date.

A canola grower from Alberta called his CCC agronomist in early July and said he has blackleg on nearly every canola plant uniformly across a field. Blackleg was fairly common in 2012 in Alberta and canola on canola could be showing heavy damage in 2013, but this sounded extreme.

The grower then said the field had been in hay for the previous 10 years or more, and that most of the land around that field was in hay. Can’t be blackleg, the agronomist thought. Blackleg is specific to canola, spores don’t carry that far, and rotation is an excellent way to manage the disease. Even if blackleg was rampant on the field 10 years ago, any canola residue hosting blackleg mycelium would have rotted and decomposed. Old residue rarely persist past three years after canola, unless weather has been very dry during those years.

Even if some remained viable that long, infection certainly would not hit every plant uniformly across the field. Blackleg spores could blow in from a neighbouring field, but again, damage would not be uniform. The agronomists didn’t want to jump to conclusions, so he dug deeper.

“What does the damage look like?” the agronomist asked. The grower described it as tan-brown lesions, some with pepper-like spots. The agronomist asked the grower to send a few photos, and he did. The first was from the top side of the leaf and was way too blurry. The second photo was better, but it was from the underside. “I thought it was useless at the time,” the agronomist said. He couldn’t make any headway with the photos. But before he emailed the grower to ask him to try again, he forwarded the photos to a CCC colleague who had a lot of experience with plant diseases. The colleague took one quick look at the underside angle and responded immediately. “That’s downy mildew.”

Downy mildew does affect canola in wet conditions, producing an irregular lesion on the top side of leaves and, more important for diagnosis, cottony mycelial growth on the underside of leaves. The photo from the bottom side of the leaf was key to this smartphone-based diagnosis.

Many cases of downy mildew popped up across the Prairies in 2013. The fungal disease tends to be on lower leaves only, where there is more free moisture. It rarely causes yield loss, especially when confined to lower leaves. The grower was relieved, and the crop recovered.

Note: This article is based on content from a Canola Digest “Diagnostic Dilemmas” article from September 2013.

Photography tips for agronomy
Crop diagnostics often come down to good photography skills. Sharing photos of symptoms, insects, weeds and more can be a good way to make a proper diagnosis, but the photos have to be good. The rules to agronomy by phone and photograph are: 1. Keep an open mind. Don’t have a pre-conceived notion of what…
Canola Watch quiz
If you have trouble with the embedded quiz on your device, click here. Create your free online surveys with SurveyMonkey , the world’s leading questionnaire tool. Answer: Blackleg is on the left. Downy mildew is on the right. Blackleg lesions have tiny black spots called picnidia. Downy mildew lesions will have white powdery growth on…
Top 10 diseases to look for in August
The time between now and harvest is an excellent time to look for diseases. Fungicide is not effective at this stage (for most diseases), but scouting and identifying diseases can help with management in following years. 10. White rust. Look for white pustules and a bend in the pod area — a telltale look that…
Top 10 photos from the 'PALOOZAs
The Canola Council of Canada agronomy team worked with the provincial canola grower groups to organize canolaPALOOZA in Lacombe, Alberta, Sask CanolaPalooza in Saskatoon, Saskatchewan and CROPS-A-PALOOZA in Carberry, Manitoba over the past few weeks. These are important engagement events to share canola best management practices and priorities with farmers and agronomists in a field…