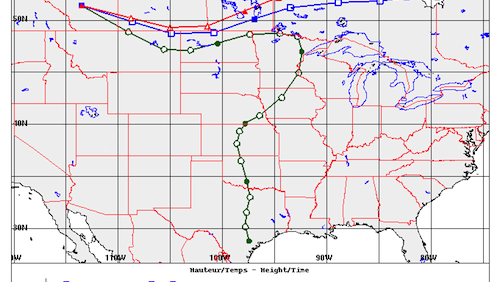 South winds from Texas and California reached the Prairies in the past week. Texas is one area where aster leafhoppers overwinter in large numbers. Texas winds turned toward Manitoba May 15, and two sites in Alberta — Olds and Beiseker — had Texas winds arrive today.

California/Mexico winds have been blowing into the Prairies the past three days. The map shows the latest trajectory. These winds can carry diamondback moth.

This does not mean the insects have arrived, just that the winds that could possibly carry them have arrived. Manitoba traps have very low levels of diamondback moth, and no evidence yet of aster leafhopper.

Late arrival of the south winds this year (they arrived April 1 last year) does not necessarily reduce the risk of aster yellows infection in canola and other crops. Chrystel Olivier, research scientist and aster yellows expert with AAFC in Saskatoon, says everything is later this year, so leafhoppers will be here during the early stages of canola. She says the situation is probably different for South Alberta, where seeding started 3-4 weeks ago.

AAFC has trapped a few leafhoppers, and is testing them to see what percentage carries AY phytoplasma.

Insect update: Winds arrive from the south
Wind trajectory maps from Agriculture and Agri-Food Canada (AAFC) indicate that winds have arrived from southern areas where diamondback moths and aster leafhoppers overwinter. Naicam, Regina and Tisdale in Saskatchewan and Lethbridge and Beiseker in Alberta had the first occurrences of Reverse Trajectories this week that originated from the southwestern U.S. and/or Mexico. This does…
Insect update: Wireworms, cutworms, south winds
Wireworms. Wireworms have not become the crisis some expected after lindane was pulled from the market, but some fields do have populations at levels that may cause economic loss. Noticeable losses are often confined to small bare patches. Check bare patches to confirm the reason for missing plants. It could be cutworms, wireworms, disease or…
Aster leafhoppers arrive later in 2013
It will come as no surprise, but winds from the deep south have not arrived on the Canadian Prairies yet this year. This is quite different from 2012, when a mild winter and early spring helped make it a bad year for aster yellows in canola in Western Canada. The first south winds in 2012…
Map of the week
Here is a wind trajectory map showing continued arrival of south winds, these ones from southern California. Southwestern North America (Texas, Mexico and southern California) is a source area for diamondback moth larvae and aster leafhoppers. Diamondback moth adults are starting to show up in traps. See Alberta’s map. Aster leafhoppers have also been reported…