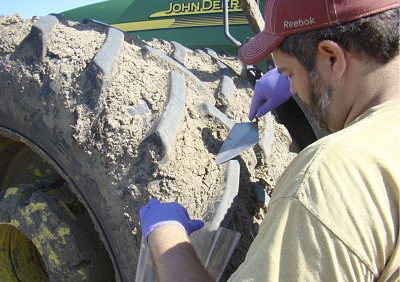 Two Manitoba fields surveyed in the canola disease survey in 2012 have been confirmed to have clubroot. DNA for Plasmodiophora brassicae, the organism that causes clubroot, was detected in soils from these two fields, and a brassica plant grown in these soils in the lab exhibited clubroot symptoms. Manitoba Agriculture made this announcement March 1.

Clubroot is a manageable disease. We know a lot more about clubroot than we did 10 years ago when it was first detected in canola around Edmonton. With early detection, use of resistant varieties and equipment sanitation practices to keep it from moving around, growers can manage the disease.

No region is immune to clubroot. Have plans in place for when it comes to your farm.

Soil pH will not prevent clubroot. Studies have shown clubroot severity to be somewhat lower in higher pH soils, but high pH soil will not stop clubroot from arriving on a field and killing the canola crop.

Don’t panic. Clubroot is expected to spread across the Prairies eventually, and clubroot was first detected in Manitoba vegetable crops in 1925. It is not a surprise to find it in canola fields. The key is to become more aware of the disease, what it looks like, how to scout for it, and how to prevent it’s spread.

Agronomists and others who would like more information on clubroot may want to register for the International Clubroot Workshop in Edmonton in June 19-21. More information will be available here soon.

Early detection makes clubroot easier to contain. By the time patches of clubroot infection are obvious in fields, clubroot spores may have been present for a while and may have already spread to neighbouring fields. Clubroot disease management plans will vary depending on the amount of disease and its severity, but growers in all regions of Manitoba should watch for the disease, especially during harvest 2013 when diseased plants are easiest to spot.

1. Learn to identify the disease. Roots of infected plants become malformed due to increased cell division and growth. Clubroot galls tie up nutrients, and severely infected roots can’t transport adequate water and nutrients to aboveground plant tissues. The best time to scout for clubroot symptoms on roots is late in the season, approximately two weeks before swathing, when root galls should be easy to identify. Click here for more information on how to identify clubroot.

2. Practice good sanitation. Clubroot spreads mainly by movement of soil that contains the hardy resting spores of P. brassicae. Equipment is the key way that clubroot spreads from field to field.
—Step 1: Rough cleaning. This is the most important step. Use a hand scraper, wire brush or compressed air to remove loose and clinging soil and crop debris from openers, tires and wheels. Sweep, blow or scrape off the frame. This should remove at least 90% of the soil from the unit.
—Step 2: Fine cleaning. Use a pressure washer at 2,000 to 3,000 psi on all areas where soil can accumulate. Turbo nozzles are generally more effective at removing soil than regular nozzles.
—Step 3: Disinfection. Disinfect all openers, tires and wheels with a 1% bleach solution or surface disinfectant of equivalent strength. A 3-gallon backpack herbicide sprayer will work for this job. All areas should remain wet with the solution for 15 to 20 minutes. For more detail, download the Clubroot Sanitation Guide.

3. Use a resistant variety. This can keep undetected levels of clubroot from increasing to economically-significant levels.

4. Control weeds. Volunteer canola and susceptible weeds (mustard family, dock, and hoary cress) must be controlled in the rotational crops. If clubroot spores are introduced during non-canola years on a field, these spores have nothing to infect if host weeds and canola volunteers are controlled. With nothing to infect, clubroot cannot reproduce and increase its inoculum levels.

5. Clean newly purchased equipment. Clean used or demo’ed equipment before it leaves the auction site or previous owner’s farm. Also check that the transport truck is clean. As a precaution, you may want to pressure wash the equipment again when it gets to your farm. Do this in a commercial truck wash or on the farm in a low-traffic grassed area away from any cultivated soil.

Clubroot management on land known to have clubroot

1. Minimize traffic in and out of infested fields. Once clubroot is found in a field, the goal is to prevent the introduction of the long-lived resting spores into new fields. Minimize all equipment traffic into infested fields. Service and nurse trucks, for example, should remain on the road and field equipment should be brought to them. Equipment leaving an infested field should be thoroughly cleaned and disinfected.

2. Limit tillage. Whenever practical, do not work infested fields when they are wet because more mud will stick to equipment and could be transported to clean fields. Reduced tillage or direct seeding also may help combat a clubroot infestation by reducing the movement of contaminated soil on equipment and by wind.

3. Use resistant varieties. Clubroot-resistant hybrids can provide a significant drop in clubroot infection and severity. Extending the rotation length between canola crops and rotating between the 2 major clubroot resistance suppliers will reduce the risk of clubroot adapting to the resistance gene.

4. Rotate crops. We encourage responsible management of canola rotations. To stop growing canola on land that may be infected with clubroot is not the most effective way to stop the spread of disease. That’s because it can exist for many years. The key is sanitation.

5. Control weeds. Volunteer canola and susceptible weeds (mustard family, dock, and hoary cress) must be controlled in the rotational crops. These volunteers and weeds host clubroot in non-canola years, reducing the effectiveness of rotation as a management tool.

6. Scout. When using resistant varieties, continue to scout for gall formation on plant roots. Low-level infection is normal for these hybrids. Higher incidence levels could signal the start of a breakdown of resistance. While scouting, look for galls on volunteer canola, which may be more susceptible to the disease.

1. If growers identify infested patches within fields, they can contain clubroot within the field with zero tillage and low disturbance seeding to minimize soil movement, and thorough equipment sanitation before leaving the field. Canola could be profitably grown on that farm for many years without requiring clubroot resistant varieties.

2. If nothing is done to manage fields with clubroot (whether presence of the disease is known or unknown), P. brassicae can be moved throughout the field in a matter of a few years — especially if tillage is regular practice on that field. Canola in a tight rotation on those fields will quickly build up the P. brassicae population, especially if moisture conditions are also favorable for strong plant growth and high yields. Within two or three rotation cycles, clubroot can be at levels sufficient to completely wipe out a crop. Rotating completely out of canola or relying on clubroot resistant varieties would be the only options. Intensive use of clubroot resistant varieties in fields high in P. brassicae has been shown in other countries to quickly overcome the clubroot resistance trait.

Clubroot: Management steps for infested land
Clubroot has been found in 18 Alberta counties and it spreads every year. See the 2010 clubroot map at the bottom of this article. Growers have clubroot-resistant varieties to choose from, but this resistance could be lost quickly if not supported by a combination of the following practices: 1. Use resistant varieties. Six clubroot-resistant hybrids…
More clubroot management tips
Early detection makes clubroot easier to contain. By the time patches of clubroot infection are obvious in fields, clubroot spores may have been present for a while and may have already spread to neighbouring fields. Clubroot disease management plans will vary depending on the amount of disease and its severity, but growers in all regions…
Clubroot found in Manitoba canola
Manitoba has had two canola fields confirmed this month to have clubroot symptoms on plants. Last year, clubroot was confirmed in two soil samples in the province, but plant symptoms were not observed. Clubroot is expected to spread across the Prairies eventually. The disease was first detected in Manitoba in vegetable crops in 1925. It…
Clubroot: When genetic resistance no longer works…
…The best management option left is the four-year rotation. Discovery of different clubroot pathotypes in central Alberta will change the rotation plans for some growers. No current varieties have strong resistance to these pathotypes. If growers have used resistant canola two or three times already on fields that were moderately to highly infested with clubroot,…