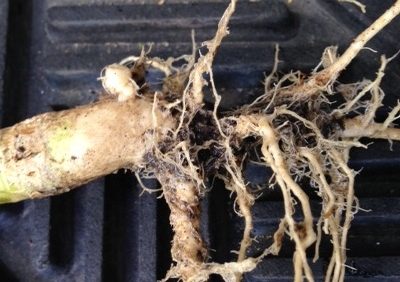 Manitoba has had two canola fields confirmed this month to have clubroot symptoms on plants. Last year, clubroot was confirmed in two soil samples in the province, but plant symptoms were not observed.

Clubroot is expected to spread across the Prairies eventually. The disease was first detected in Manitoba in vegetable crops in 1925. It is not a surprise to find it in canola fields. The key is to become more aware of the disease, what it looks like, how to scout for it, and how to prevent its spread. With early detection, use of resistant varieties and equipment sanitation practices to keep it from moving around, growers can manage the disease.

MAFRI encourages Manitoba canola growers to assume they have clubroot within 50 km of their farm, and act accordingly to prevent the spread of the disease. Clubroot spreads primarily by soil movement on machinery. It is a soil-borne disease, not a canola residue-borne disease, so be mindful of soil movement in all fields, not just those seeded to canola.

Here is what works to prevent and manage clubroot:

—Proper equipment cleaning, specifically to reduce the movement of soil on field equipment.
—If you have fields confirmed to contain clubroot, don’t use tillage on those fields. Treat them last to prevent any movement of soil to other fields on the farm.
—Clubroot-resistant canola varieties.
—Crop rotation. Note that tight canola rotation does not cause clubroot. Tight rotation can increase the rate of spore build up, but it does not cause clubroot to show up in a field.
—Good weed management of alternate hosts.
—Early seeding date
—Scouting to achieve early identification
—Zero till
—Clean inputs
—Planning. Clubroot is not just a canola problem. It moves with soil from any crop
—Quarantining infested patches. Grass them in. Change field approaches if they are infested.

Here is what doesn’t work to prevent and management clubroot:

Clubroot identification: Since the two fields were confirmed in Manitoba, growers have been coming forward with many samples that could be clubroot. In all other cases, except these two so far, the galls have been hybridization nodules. Hybridization nodules stay hard and white into the fall, while clubroot galls will have started to break down — unless it’s a very late stand of canola that’s still green. Lab tests can confirm.

It is important to remember that the spore load is probably fairly low in Manitoba at this point, so even if you have some clubroot in your field, the symptoms may not be all that obvious above ground. In other words, even without any obvious symptoms, clubroot could still be there.

Labs can also test soil samples for clubroot DNA. Clubroot most often enters a field at the entry point for machinery. Take topsoil samples from an area about 100 feet from where you start working. In that 100 feet, most of the soil that was on shovels and openers will have shaken loose. That is where clubroot is likely to start. Spores will be in the top 1” of soil. Gather soil from 5 to 10 locations within that small area, and send in a composite for testing.

Another way to test is to dig a bunch of canola plants in that area and look for galls. By now, clubroot galls will be brown and rotten, but if you dig them up carefully, you may see the shape of a gall. In that case, send in plant samples for confirmation.

Clubroot update: Manitoba cases, R varieties
Manitoba has a few confirmed cases of clubroot in 2015. One field with galls was found in the R.M. of Pembina, and fields with galls were found in the Swan River Valley. Manitoba’s Pest Surveillance Initiative Lab also confirmed the presence of clubroot DNA in soils in many areas of the province, and testing is…
Clubroot management for Manitoba
Two Manitoba fields surveyed in the canola disease survey in 2012 have been confirmed to have clubroot. DNA for Plasmodiophora brassicae, the organism that causes clubroot, was detected in soils from these two fields, and a brassica plant grown in these soils in the lab exhibited clubroot symptoms. Manitoba Agriculture made this announcement March 1.…
Clubroot: How to manage the disease
The first step in managing clubroot is to minimize the chance of introducing clubroot to the farm in the first place. Make sure equipment and vehicles entering fields are clean. (Link to disinfection tips.) All people entering a field should have disinfected rubber boots or wear disposable booties over their footwear. All seed (not just…
Different clubroot pathotype confirmed
Research has confirmed the presence of a different clubroot pathotype in the Edmonton region and none of the commercially available clubroot resistant varieties in Western Canada are effective at managing it. Stephen Strelkov, the University of Alberta researcher leading this project, has identified other resistance genes that could work, but they are not currently in…