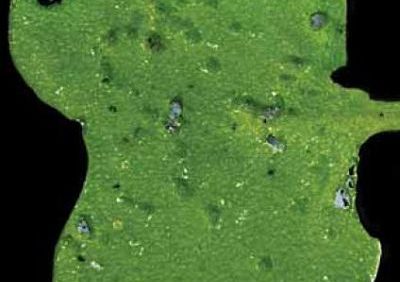 Flea beetles are small, leaf-feeding beetles with greatly enlarged hind femurs and a habit of jumping when disturbed — which gives them their common name. They are the most chronically damaging insect pest of canola in western Canada. Direct losses to oilseed production average 8-10% of the annual crop yield, and in outbreak years flea beetles can cause hundred of millions of dollars damage.

Flea beetles damage canola by feeding on stems, cotyledons, and young true leaves. Feeding at leaf edges causes notches, while feeding on the leaf surface causes small circular feeding pits (Fig. 1). Although each pit is < 3mm (<1/8”) and rarely perforates the leaf, tissue around each feeding site dies, and under heavy feeding pressure the sheer number of feeding pits can give the fragile young leaves a shot-hole appearance. Death of damaged tissues can be rapid in warm, dry, windy weather.

During cold, inclement weather and periods of slow plant growth, flea beetles can feed on seedlings at or near the soil surface, severing the stem or destroying the growing point and eventually the seedling.

Early in the season flea beetle feeding damage to canola can be concentrated at field edges as flea beetles walk or fly into fields. Pesticide application to field perimeters may control invading beetles if they have not spread throughout the field.

In pest management, the economic threshold is the density of a pest at which a control application will provide an economic return. The nominal economic threshold for flea beetles in canola crops in Canada is an average defoliation level of 25% or more of the seedling leaf area. It’s also important that flea beetles are present and continuing to feed.

Figures 2 and 3 illustrate varying levels of damage to canola seedlings. It is useful to estimate damage using a scale from 0 to 10, representing 0% to 100%. Although it is damage to the youngest tissue that is of immediate concern, the damage to the two youngest expanded tissues should be assessed to determine if feeding levels are decreasing or increasing.

Which plants in Figure 2 should be sprayed for flea beetles:

—Damage to the cotyledons of Figures 2a to 2c are below the economic threshold, while those in 2g to 2j are above it.
—The cotyledons in Figures 2d to 2f are at the economic threshold, and if this is the average damage in the field, control decisions should be based on soil moisture levels, seedling vigour, flea beetle activity, and weather conditions. If soil moisture supports rapid canola growth and seedlings are vigorous, the crop may be able to stand a little more feeding than slow-growing drought stressed canola. Watch this crop carefully.

Which plants in Figure 3 should be sprayed for flea beetles:

—In Figure 3b the cotyledons average 25% damage but the first true leaf is undamaged and the overall seedling damage level is below the economic threshold. If monitoring shows that no further damage is occurring, control may not be necessary.
—In Figure 3c the cotyledons average 25% and the first true leaf has damage below the economic threshold, but the leaf petiole has been heavily fed upon and control may be necessary.
—In Figures 3d, 3e and 3f, the first true leaf is totally destroyed. Control action is recommended if most plants look like this — no matter what the feeding levels on the cotyledons.
—The true leaves of Figures 3h and 3i will likely outgrow the damage, while those in Figures 3k and 3l have surpassed the economic threshold.
—Estimating damage to an unexpanded young leaf (eg. Fig. 3j) is problematic because only a few feeding pits could constitute considerable damage while the same amount of feeding might be negligible if the leaf were larger. If many very young leaves are heavily damaged control should be considered.

Canola seedlings in several areas of a field should be examined before a control decision is made. A sampling protocol could include inspecting 20 randomly selected seedlings at each of 10 sites in a field. Sites should include field edges, within-field locations, and topographic features such as tree lines, hedgerows, and bluffs. Producers should check canola fields daily for flea beetle damage, especially if the weather is warm and if the fields are seeded on or near canola stubble.

There are two common flea beetle species in canola on the Prairies (Fig. 4). Adults of the crucifer flea beetle Phyllotreta cruciferae (Goeze) are small, oblong-ovate or oval-shaped beetles 2-3 mm long. They are black in colour or black with a metallic green, blue or purple lustre. The wing covers have indentations on them that are randomly arranged.

A third species, the hop flea beetle Psylliodes punctulata Melsh., occurs in low numbers in canola fields across the Prairies. (The top left species in Fig. 4). Hop flea beetles are slightly larger than crucifer ones, are convex shaped, a deep bronze colour, and have the indentations on their backs arranged in rows.

By means of timely field monitoring and careful estimation of flea beetle damage to canola seedlings, producers can knowledgeably answer the question “Should I spray for flea beetles?”