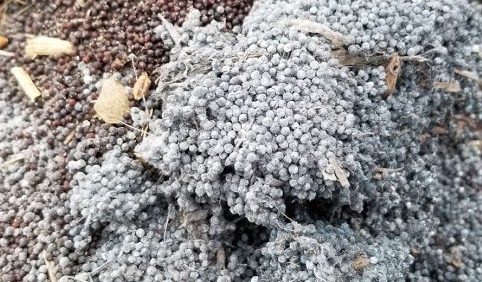 On-farm storage capacity allows farmers to sit on more of their grain and wait for better market prices, but this advantage falls apart if the crop spoils in the meantime.

CCC agronomy specialists are getting calls this month from farmers worried about the state of their canola. The best thing is to check all bins. Transferring canola from one bin to another on a cool day is the best way to stop heating. When transferring, move at least one third of the canola out of a bin. If green counts, moisture, weeds or dockage are high (in short, anything that may increase the storage risk), transferring the whole bin may be the safest strategy. Feel for heat and sniff for a rancid, sweet or burnt smell as the canola comes out of the bin. How to check bins.

Storage risks for canola include moisture, dockage and green seed, which are common this year, as well as warm grain, sprouted seeds and mouldy seed.

Moisture and mould often work together to trigger heating. Clumping is a sign of mould growth. Storage research found that canola seeds at 25°C and 10.6% moisture clumped together after 11 days and visible mould colonies appeared after 21 days. Note that this research was done in small tubes with uniform conditions. With variable conditions in most bins, clumping may occur more quickly in an on-farm situation.

Over time, the risk of spoilage due to these factors will increase. Fluctuating outside temperatures don’t help. Warm and sunny ambient conditions that warm up the walls of the bin can encourage moisture migration inside the bin – concentrating moisture at the bottom of the central core if the grain is otherwise cold. In the winter, is it often more common to see moisture accumulation at the top of the central core if the grain is significantly warmer than ambient conditions. This can create a start point for heating. Moisture can come from the grain itself or from dockage, like pod and stem pieces that may have higher moisture than the grain.

Things to think about

One, temperature cables can identify a hot spot before it becomes a problem. But keep in mind that grain is a fairly good insulator. A hot spot that starts in the midpoint between two cables could be quite advanced before it shows up on the temperature cable…which is another reason to move quickly. When checking trends on temperature sensors, note that ANY unexpected rise in temperature should be a clear signal that action is required. Once an area starts to warm up, the reaction has started and the canola will probably just get hotter and hotter until spoilage starts. Then spoilage will spread until the whole bin is damaged.

Two, moisture testers are not designed to work on cold grain. NDSU storage researcher Kenneth Hellevang has this tip to avoid moisture tester error: Put the sample in a sealed container (to allow the sample to come to equilibrium), bring it inside and wait 6 to 12 hours before testing.

Three, cold canola may not be as safe as you think. Freezing tough (10 to 12.5% moisture) or damp (over 12.5%) canola by running cold air through the bin can be a short-term storage solution for canola that couldn’t get dried before winter…but check that canola regularly. In December, the Canola Council’s Clint Jurke discovered that a 3,000-bushel bin of 15% moisture canola was starting to heat, even though the bin was cooled to -5°C.

The best solution for high moisture grain in storage this winter is aeration to achieve uniformly cold and frozen conditions, and conditioning in the spring once temperatures allow. Ultimate “safety” should never be assumed!

Alert: Check bins regularly to keep canola safe
Some growers have reported rising temperatures in their canola bins. Growers are encouraged to check all canola bins as soon as possible. Rising temperatures inside a bin can quickly lead to heat-damaged canola. While heated pockets can start very small, going unnoticed for days and perhaps weeks, they can eventually ruin a whole bin if…
Canola is heating in bins!
A spike in heated canola has been reported over the past couple weeks. Growers are encouraged to check all canola bins as soon as possible. Spoilage usually starts small and heating is not always detected by temperature cables until some of the grain is already damaged. Cooling the bin and stopping this early heating now…
Blowing cold air through canola bins
While weather shifts from winter to spring, growers will want to check bins. Extended moments of warmer weather in winter can increase air and moisture movement inside bins, possibly unsettling stored canola. As we exit the winter period of really cold days, growers may wonder whether running fans on cold days to substantially drop the…
Cool those bins of hot canola
Canola harvested during this week’s hot weather has to go on aeration to cool it off — even if the seed moisture levels are “dry.” Canola at 10% moisture is at risk of spoilage when put in the bin at 20 C. At temperatures of 25 to 30 C, the spoilage risk is that much…