Home / Canola Watch / Do you need to change blackleg resistance for 2020? 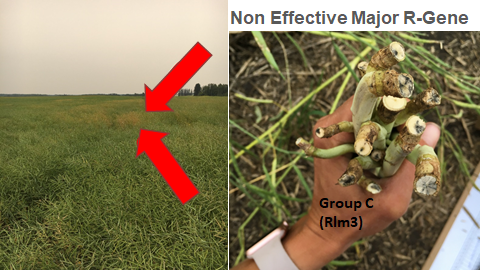 Fields usually have a diverse population of blackleg races carried over on canola crop residue. A 2-year break between canola crops basically eliminates the economic threat from blackleg as most crop residue carrying blackleg fruiting bodies is degraded in that time.

Blackleg resistance has allowed producers to successfully produce canola with a shorter break between canola crops, but no source of resistance is infallible. Every canola variety we grow in Canada is resistant (R) to blackleg, but each can be overcome if the field’s blackleg population doesn’t match the variety’s resistance package. Even if they have a stack of R genes and good support from quantitative resistance, varieties cannot be resistant to all pathotypes. Growing the ‘best’ R varieties over and over will select for races that can overcome this resistance. (Read more in the Genetic Resistance chapter at blackleg.ca.)

That is why it’s important to scout for blackleg severity this time of year in all canola crops. If severity is high, consider switching to a new source of R the next time you grow canola on that field. Or give the field a two-year break from canola. How to use blackleg race ID tests to pick the right R source.

How to scout for blackleg. Blackleg scouting is part of a complete pre-harvest disease scouting program. Pull up at least 50 plants in a W-pattern, starting at the field edge. Clip the base of stem/top of root and look for blackened tissue inside the crown of the stem. The amount of infection present will help identify the level of risk and the best management practices for that field in following years. Use the 0-5 blackleg disease rating system to identify severity of the infection along with the incidence of the disease. How to identify blackleg. How to distinguish blackleg from other diseases found this time of year.

What is quantitative versus qualitative resistance?

Qualitative or ‘major gene’ resistance: needs to match up to a specific BL race to be initiated; stops disease development at the site of infection; effective throughout the growing season.

New CCC video: Blackleg Disease and Resistance Management
A vivid new video from the Canola Council of Canada zooms in on blackleg, showing how the canola disease infects a plant, how it spreads throughout a field, and what…
Test blackleg races in a field; make better seed decisions
Got some fields with higher levels of blackleg? If average severity is moving beyond 1.5 toward 2 or more, this is a clear sign that the blackleg resistance in the…
Terminology of genetic resistance and loss of resistance
Plant disease resistance is a term used to describe the reduction of pathogen growth on plants to minimize damage from the pathogen and potential yield loss. Qualitative resistance comes from…
Seed: How much blackleg before I rotate resistance?
If one in 10 plants has a blackleg rating of 2 or worse, this is a clear sign that the blackleg pathotypes in a field do not align with the…