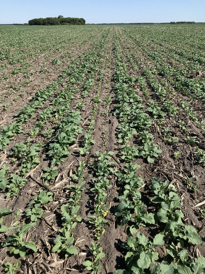 We heard two reports this week of sulphur deficiency symptoms.

One situation was the result of other early-season pressures – delayed emergence and flea beetles – and was solved as the plants grew bigger. John Heard, crop nutrition specialist with Manitoba Agriculture, describes the situation:

“I was out the other day to visit a stand of stunted canola, where delayed emerging rows were visibly nutrient deficient versus the early emerging rows (See Figures 1 and 2). The cause for the delayed emergence was not apparent – seeding depth, wheel tracks, compaction – but the “stunted plants” appeared to be lacking apical dominance and had much branching. This is typical of what we were seeing in areas where flea beetle feeding was heaviest. It may be that the quicker emerging plants were able to withstand the injury better. This field happened to be the only field the grower did not spray for flea beetles.

“Nevertheless, these struggling runts were exhibiting sulphur deficiency symptoms – general yellowing, leaf mottling, cupping leaves and some occasional purpling. Sulphate-sulphur had been applied with a portion of the nitrogen in a mid row band, some 5” from the seed row. It appears that the more vigorous rows had tapped into this sulphur while the poorer rows had not. This was confirmed with tissue sampling (Table 1.) An interesting case where a combination of uneven emergence and subsequent insect injury showed up as a nutrient deficiency.”

The second situation was noticed in flowering canola. The crop had clear signs of sulphur deficiency – pale flowers and poor pod development. Sulphur deficiency is one of seven reasons for missing pods, as described in this article. When diagnosing sulphur deficiency, look for stunted growth, light-coloured leaves on newer leaves vs older leaves, purpling and cupping on stem leaves during bolting, and pale, smaller flower petals, especially on hill tops where S deficiency tends to be more common. Would a top dress that late provide any benefit? It might. While the recommendations are to top-dress sulphur before early flowering, a later application might provide enough benefit to make it worthwhile in a situation of severe shortage. If the crop cannot use all the nutrient applied as a late top dress, most of the S would be available for next year’s crop. The only loss situation would be leaching on a sandy textured soil with lots of rain and snowmelt.

Look for signs of sulphur deficiency
An in crop application of sulphur can make financial sense for canola if: —Growers could not put the desired rate on at seeding. —Yield potential improved and growers want to add sulphur to their nitrogen top up. If field conditions have been excessively moist, sulphur may have moved lower in the soil profile. As canola…
Sulphur deficiencies after extended rains
Fields that have received lots of rain may be showing sulphur deficiency. Rain leaches sulphur lower in the soil profile. Plants can usually access this leached sulphur later in the season, but the roots have to reach that far. Often with heavy rain throughout the season, plants will not root as deep. In this case,…
Light-coloured petals: Sulphur or something else?
Canola Watch had a question this week about light-coloured petals and what can cause them. The field in question had large unruly patches of light-coloured flowers, indicating it was likely related to soil. (See the drone image below.) Sulphur deficiency seems the most obvious, as pale-coloured flowers are a common symptom of a sulphur shortage.…
Short sulphur? Use in-crop top ups
If you can’t get enough sulphur for seeding, divide what you have across all your canola acres, then top up with an in-crop application of ammonium sulphate. Post-emergence sulphur can be applied up to flowering and still provide a yield benefit, but the most efficient yield conversion comes from sulphur applied at the time of…