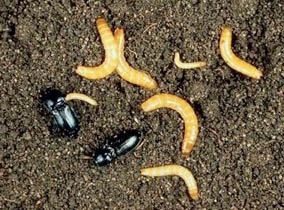 Flea beetle scouting. Most fields will not require a foliar insecticide for flea beetles in addition to seed treatment, but you want to check to make sure. Begin monitoring right after emergence and through until at least the four-leaf stage. Seed treatment can be effective through most of this period, but slow-starting or slow-growing crops under intense flea beetle pressure may require an additional foliar insecticide. Before spraying, follow these 8 steps to make the right decision.

Cutworms or wireworms? A few fields in the Peace River region of Alberta have higher levels of wireworms. Noticeable losses are often confined to small bare patches. Check bare patches, and especially the interface between healthy seedlings and dead patches, to confirm the reason for missing plants. It could be cutworms, wireworms, disease or something else entirely — Richardson ground squirrels, in some regions. Wireworm rarely causes economic levels of damage in canola, and even if they did, insecticides sprays can’t get them. If the damage is from cutworms, you have options.

Insect Update: Flea beetle products, diamondback moth numbers
Flea beetle foliar applications. Slow-growing crops or thin stands are often more likely to benefit from foliar applications of flea beetle protection – if thresholds are met or exceeded. Always scout and make decisions for each field if thresholds are met or exceeded. How to assess 25 per cent leaf area losses. How to make…
Insect update
Flea beetle spraying picked up again this week, as more canola fields reached thresholds. Don’t give up on flea beetle scouting just yet. Click here for more on the flea beetle spray decision. Cutworm feeding has been detected in some fields, but spraying is still minimal at this time. Digging will be required to distinguish…
Insect update: Flea beetle thresholds and frost
Flea beetles Flea beetle thresholds don’t change with frost, but frost may have changed the crop assessment situation. Here’s how: —Cotyledons that will die due to frost damage should not be a factor in the decision, even if they had flea beetle damage before the frost. Instead, check that the growing points on these seedlings…
Insect update: Wireworms, cutworms, south winds
Wireworms. Wireworms have not become the crisis some expected after lindane was pulled from the market, but some fields do have populations at levels that may cause economic loss. Noticeable losses are often confined to small bare patches. Check bare patches to confirm the reason for missing plants. It could be cutworms, wireworms, disease or…