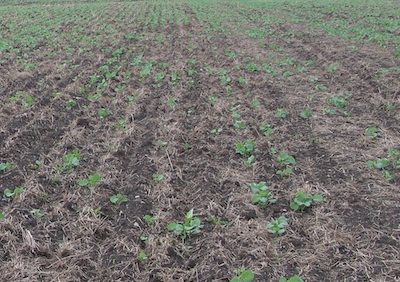 Cutworm outbreaks are hard to predict and numbers can vary significantly field to field. It often has to do with adult attractants at the time of egg laying. In general, fields that had flowering plants (crops or weed patches) in August or September of the previous year may have higher cutworm counts. These flowers attract the adult moths, which lay their eggs in these areas. Females also prefer loose worked soil for egg laying. A long relatively dry fall can also allow for maximum egg laying opportunities, and may result in a more widespread outbreak.

Weather conditions can influence the survival of overwintering eggs and larvae. In southern Alberta, for example, the winters of 2014-15 and 2015-16 were unusually mild, which meant high winter survival. Wet springs can increase cutworm mortality due to pathogens, but this tends to affect those species that overwinter as larvae more than those that overwinter as eggs. The most common species in Western Canada – redbacked and pale western – overwinter as eggs, and may not be as susceptible to saturated soils. Dry springs can improve survival of larvae.

Reason two: To identify the cutworm species present as this can influence management decisions. Underground-feeding cutworms are less likely to encounter spray, for one thing. Pale western cutworms are primarily subterranean feeders, which means a systemic product such as a cutworm seed treatment may provide the best protection. (This is something to consider for next year.) For lots more on species identification, use AAFC’s Cutworm Pests of Crops on the Canadian Prairies or read this Canola Watch article.

Start scouting at the edge of patches or around the last living plants within patches. This is where cutworms, if present, will be feeding. Dig up the soil around the base of living plants at patch edges, collecting soil from a 50 cm by 50 cm area to a depth of 5 cm. Put the soil into a basin, loosen and shake it up to activate cutworms. Larvae often curl up or attempt to hide in the debris when exposed. As noted, nominal thresholds are based on stand reduction. The purpose of scouting is to confirm the presence of cutworms and identify the species. For other crops, such as cereals where thresholds are based on cutworm counts, count the number of larvae then multiply by four to estimate the number of larvae per m2. Repeat this process 5 to 10 times at 50 m intervals, including at low, side-slope and high parts of the field. Note that cutworms are often just above the moisture in the soil, so if it has been hot and dry, digging to 7.5cm (~3”) may be worthwhile. Any place birds gathered on the ground in a field is a suspicious cutworm scouting point.

1. Are cutworms still actively feeding? Put flags in the ground at the edges of a patch. Check the next day to see if the bare patch of missing plants has expanded beyond that flag.
2. Size and lifecycle. Larger cutworms (1 to 1.5 inches long) will be closer to the end of their larval stage. When they pupate (go into their cocoon-like brown shells), they’re done eating. The risk in trying to estimate this lifecycle stage is that cutworms do most of their eating in that final instar. In warm conditions, it can take 4 to 6 days for cutworms to grow through the final instar. They can do a lot of damage in that time.
3. How much damage can they do in a day? A cutworm can kill a young canola plant in a few minutes by cutting through the stem at or below the soil surface. Species of cutworm that crawl up on plants to feed may eat leaves, but not kill the plant unless plants are very small or cutworm numbers are very high. Weather also influences how much they’ll eat. While metabolism slows in cool weather, they will still feed a bit. But that also could mean they live longer between instar cycles.
4. Gut colour. Cutworms stop feeding while molting between instars and as they are about to pupate. Squeeze a bunch of them. Green insides indicate active feeding. Brown insides indicate they’re not feeding. While insecticides work through contact or ingestion, cutworms do have to surface to be controlled. If they’re not eating, they may stay underground. However, residual activity of most registered products should get them when they start feeding again. For example, in a study where 50% and 34% of pale western cutworms were in a molt at the time of application, by 7 days later the pyrethroid that was used killed 81% and 84% of the cutworms (Hill, Byers, and Schaalje. 1992: J. Econ. Entomol. 1387-1392). Do some follow-up scouting, but stick to thresholds the second time. A few living cutworms found in the few days after an application may not indicate a need to spray again.
5. Beneficials. Most cutworm species are native to North American so have many natural enemies — including insects such as cotesia and diseases caused by fungi, bacteria and viruses — that provide population control. Waiting for these to take action may not be a wise decision if numbers are at thresholds and the crop is at immediate risk, but letting nature take its course when numbers are below threshold is usually the best decision. A farmer should never spray for population control reasons. Stick to threshold-driven decisions to protect the crop only. As Alberta Agriculture entomologist Scott Meers says, “Lots of things control population. Spray is not very good at it.” Also, spraying now will not reduce populations for next year because that population is based on adult egg-laying later in the season and adults (moths) are very mobile.

Time of day to spray. Cutworms surface at night to do their above ground feeding. For most insecticides registered for cutworms, spraying as close to nightfall as possible will improve results. Synthetic pyrethroids (Decis, Matador, Silencer, for examples) further benefit from late-day spraying because they should be applied when temperatures are below 25°C. A systemic product with a long residual, such as Coragen (which has “translaminar” movement into the leaf or stem), can be applied during the day. Since not all cutworms will surface on a single night, it may take several days before full effect of a residual insecticide is achieved.