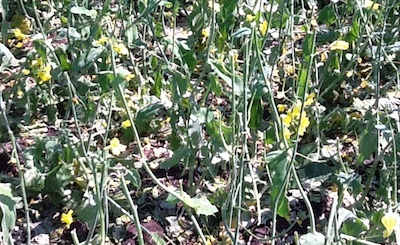 The later hail occurs in the season, the more damage it can do to yield. That said, flowering canola can, with enough time, recover from hail that knocks off a large percentage of flowers. Canola will flower for longer to compensate. In light hail, canola can sometime over-compensate and produce even higher yield. In serious hail situations where entire flowering branches are knocked off, plants that are still actively flowering can produce new branches. This will set back maturity, which is why calendar date is important. But with enough season left, these new branches can produce a decent yield.

In a hail study at Fort Saskatchewan, Alberta, there was a response to fungicide applied once the flowering resumed AND when the crop recovered enough to have good yield potential. This response may have occurred because moisture that came with the hail increased sclerotinia spore release and canopy moisture. In UCC nitrogen trials, one site that responded to extra nitrogen was a hailed site. But that nitrogen was put in place earlier in the season. The response likely occurred because the crop needed the extra nitrogen to rebuild biomass lost to hail.

Growers applying a rescue treatment are encouraged to leave multiple check strips and compare yields for treated and untreated strips. Multiple strips are important in this case given the spotty nature of hail. Using one strip or applying treatment to half the field may not provide an accurate comparison. Follow the Ultimate Canola Challenge protocol for strip trials. Find them here. If following UCC protocol, would you consider sharing your trial results with us? Email Nicole Philp at philpn@canolacouncil.org.

What would a fungicide after hail be for? Fungicides should be used carefully and according to their label recommendations. Applying a fungicide after the rosette stage is too late to prevent the most serious blackleg infection and after 50% bloom is too late for sclerotinia prevention. If hail occurs during flowering, growers should wait until the crop comes back into flower and re-scout for sclerotinia risk before making a spray decision.