There are two problems with ruts in fields:
1. Ruts increase wear and tear on machinery, reduce operator comfort and disrupt the seed bed. They need to be filled in and levelled off before seeding in spring.
2. Ruts can mean potential hidden soil compaction which could extend to 24 inches below the depth of the rut.

Soils at field capacity for moisture are most susceptible to compaction. At field capacity, small pores within the soil are full of water and large pores still contain a lot of air. Compaction squeezes out the air and pockets collapse, sticking together with the moisture. Interestingly, saturated soils – where all pores are full of water – are at low risk for compaction because there’s no air. Water prevents pores from collapsing. So ruts made in very wet soils may not leave much compaction. 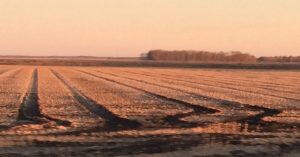 This spring, use tillage to fill in the ruts. Set the depth a bit lower than the depth of the ruts and use either a heavy duty cultivator and harrows or double disc. It could take a couple of passes. Stick to just the rutted areas to limit tillage. If ruts are deeper than the topsoil layer (A horizon), use only shallow tillage to fill the ruts. Avoid going into the B horizon as this will mix poor quality soil with the high quality top soil.

Deep rip in dry conditions only. Fields with ruts will likely still have relatively high soil moisture levels.  This means the rutted areas should NOT be deep ripped in the spring.  Ripping can fracture compacted soils and reduce the soil compaction below the ruts, but this only works when soils are relatively dry – with water at less than 40% of field capacity. When ripping in wet soils, fracturing does not occur. When soils are wet and are higher in silt or clay, often the ripping will cause the soil to smear resulting in more problems and no fracturing will occur.

Over the summer: Watch rutted areas through the growing season. Dig some soil pits to 24 to 30 inches and/or probe to see if the soil is compacted.  If soil compaction is evident and leads to depressed crop growth, then in the fall after harvest, if the soils are relatively dry, ripping could be considered.  If possible, try to only rip the previously rutted areas to avoid unnecessary deep tillage.

More on compaction: In saturated soils, water fills all pores. This can actually make soil somewhat immune to compaction because water prevents soil pores from being compacted. Cryoturbation — freezing and thawing – of soil can reduce compaction but it may take several winters. Read more.

–Thanks to Ross McKenzie for this information.

What do I do about ruts?
Swathing or combining in soft soil conditions will leave ruts. Some fields will also have ruts from spraying fungicide at flowering. We know that tillage will spread clubroot as well as weed seeds and verticillium, but ruts can create headaches for combining, fall spraying and seeding next spring. Working wet fields can also cause compaction.…
Tips to prevent and manage soil compaction
At the Soil Compaction Workshop at Agriculture and Agri-Food Canada’s centre in Portage la Prairie, Man., attendees learned the following… 1. The first pass over a field causes 80% of the compaction. Controlled traffic programs can help to minimize compaction over the entire field by keeping most of the field from getting even one pass…
Your tips for ruts and overwintered canola
We’re putting together some tips on managing ruts and expectations for canola left out all winter. These will be posted in the February or March Canola Watch. Do you have tips on ruts management, combining over-wintered canola and crop insurance strategies for over-wintered canola? Share them with us by email to whetterj@canolacouncil.org or through Twitter…
Top 10 planning and prep jobs for April
1. Get the drill ready. Check each opener, tire and hose. If you have a perfectly flat spot for leveling, that may also help achieve consistent seed and fertilizer depth. Read more. 2. Watch the Canola Stand Establishment video. 3. Try the tools at canolacalculator.ca to find the target plant stand that fits your risk…