Recent trends in the way farmers choose to harvest and store canola are raising questions about current safe-storage guidelines. Bins are getting larger, more farmers are leaving their canola stand to maturity for direct-cutting and, increasingly, farmers want the option to keep canola in the bin longer as a marketing tool. 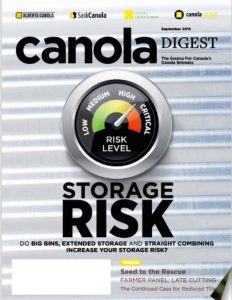 Here’s how each can add to canola storage risk and what growers can do about it:

1. Big bins. Safe storage parameters were developed in smaller-scale bins, whether that be bench-scale in the lab or smaller commercial bins. These guidelines may need to be revisited to reflect differences in the airflow dynamics of larger volume storage.

Although the risk could be seen as higher due to the sheer amount of bushels at stake, Paul Leverington, president and CEO of Custom Marketing Company (CMC) in Fargo, North Dakota, believes it isn’t necessarily the amount of bushels that pose the real risk for storage, but the depth of the grain. “It wouldn’t be out of the question to condition 28,000 bushels of canola to the appropriate moisture and temperature, so long as the depth of the grain is no more than 16 feet,” he says.

This is one of the strict parameters CMC has for canola storage in its “Pressure Cure” bin systems. (See the sidebar for more.) Monitoring technology has also reduced the risk for canola in large bins, Leverington adds. “Seven to 10 years ago when the grain management technology just wasn’t where it is today, I don’t think I’d have been comfortable recommending larger bin types,” he says. “It was really just too hard to know what was going on in the entire grain mass.”

Depth of the grain mass is an issue for canola because of pressure and air flow. Harvey Chorney, longtime member of the Chorney family farm in Manitoba and vice-president of Manitoba operations for Prairie Agricultural Machinery Institute, says the amount of back pressure resisting the air going through a grain mass depends on seed size and the height of grain in the bin.

Chaff can also complicate airflow. University of Manitoba grain storage researcher Digvir Jayas showed this in the 1980s, and Chorney wants to revisit this work using bigger bins and different harvest practices. He plans to investigate the difference in airflow of bins loaded with a spreader and those that are not. “The spreader helps to evenly distribute chaff and fines,” he says.

Without a spreader, chaff tends to concentrate closer to the walls of the bin and fines closer to the centre of the bin. This distribution exaggerates airflow problems because air tends to take the path of least resistance. “While the problem is likely almost negligible in small diameter bins,” Chorney says, “it could become much more of an issue as bin diameters increase.”

Consider the scenario of first having slightly peaked grain creating the most resistance in the centre of the bin. Add to this a concentration of smaller-than-canola fines, and you’ve increased the resistance to air flow even more in that central core. Add larger-than-canola chaff to the outside walls, decreasing the resistance to airflow, and the tendency for air to move up along the walls and around the peak has been greatly exaggerated.

Ensuring adequate aeration for the size of the bin is crucial. For natural air drying, current recommendation is air flow of one to two cubic feet per minute (cfm) per bushel. For large bins, Chorney says fans are available that can properly aerate to the top of the bin, but they require three-phase power to drive the requirement needed.

2. Straight cutting. The same principles that apply to safe storage of windrowed canola should technically apply to direct- or straight-cut canola. But certain characteristics common in a straight-cut field have the potential to lead to more issues in the bin.

These characteristics are: pockets of higher-moisture weed seeds that could be present in crops that did not get desiccation or pre-harvest treatments; green stalk and pod material; and variability in the moisture content of the seed itself. These all pose risks for storing straight-cut canola.

Anastasia Kubinec, oilseed specialist for Manitoba Agriculture, wonders whether some of the anecdotal storage issues go beyond high-moisture dockage material and have more to do with the physiological process of the seed itself. “The red flag of straight cutting to me is the unknown of how long that seed is respiring (in the bin) compared to seed that has been swathed,” she says. “Do we need to treat these bins differently? Do the fans need to be on longer? Should this canola only go into a smaller bin? And would this be different again if you desiccated the crop? I really think this is something we need to investigate.”

3. Long-term storage. Market availability and volatility and specialty contracts have increased interest in longer-term storage, potentially throughout the warm summer months. Storage through a cycle of cold and then hot seasons can increase the risk of canola spoilage.

Joy Agnew, researcher with PAMI in Humboldt, SK, has one year of summer storage research under her belt and a second just wrapping up. Contrary to what the theory tells us, the first year of her project indicated it is best to leave the bulk alone for summer storage. But this canola was binned at 6.5 percent moisture and cooled with the fans in the winter. Agnew’s second round will see if the recommendation should vary based on parameters like moisture, temperature and bin size.

Rather than learning hard lessons on the farm, questions around proper storage of canola that has been straight cut, put in large volume bins and kept through the summer months will hopefully be answered by controlled research. Until then, diligent monitoring is the best tool at our disposal to ensure the quality of our stored grains in any storage situation.

Custom Marketing Company (CMC) has five components to its Pressure Cure system for grain storage. They are:

1. A “no-fines” floor which limits fines from falling through.
2. High speed fans that can push more air through a small-seeded grain that has higher static pressure. In combination with this, they recommend no more than 15-16 feet of depth for high-moisture grain.
3. Lots of roof vents, reducing back pressure against the fans. No roof at all would be ideal, but for practical purposes, the more vents the better.
4. A monitoring system using a combination of cables, sensors and fan controls to run fans only when efficient to do so. Fans also automatically stop when moisture hits the target.
5. A peak leveler. This spreader works around cables to flatten the surface of the grain to improve airflow through the whole mass.

Storage: Hot canola is at risk
Canola binned hot, even if it has low moisture, low dockage and low green, should still be put on aeration. This will even out the temperature throughout the bin and help remove moisture from respiring seed. Even at low moisture, convection currents within the bin could concentrate this moisture. For safe, long-term storage, canola should…
Tough or damp canola: Storage risk
Canola harvested at 12.5% moisture (tough) or 15% moisture (damp) may not last long in storage before spoilage begins. How long is hard to predict. If warm, spoilage could start within a matter of days. If stored cool or cold, canola may last longer without spoilage, but this bin will become very unstable with any…
Storage risk: Can canola be too dry?
Not really from a storage risk perspective. Canola is “dry” below 10% moisture, and 8% moisture (in combination with temperature below 15°C) is considered safe for long-term storage. When canola is very dry, one risk is that seed could start to crack if handled aggressively. These cracked seed become dockage, which means you don’t get…
Factors that increase canola storage risk
Factors that increase the risk of spoilage for stored canola are high moisture, high temperatures, green seeds and dockage. This article describes these major factors and others. All canola should be conditioned immediately after combining to cool it down, even out the temperature throughout the bin and remove any moisture released through natural seed respiration…