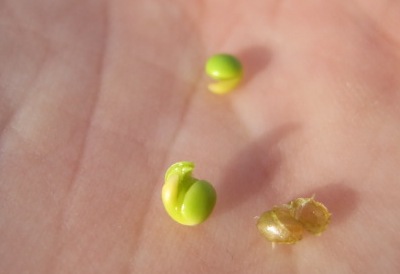 After a drought-stressed summer in many areas of the Prairies, canola plants may have a lingering hormone response that can cause seed sprouting in the pods and regrowth of cut plants.

The Canadian Grain Commission’s Official Grain Grading Guide, which you can read online, defines sprouted canola as those seeds having a ruptured seed coat in combination with either a rootlet that protrudes beyond the normal contour of the seed or distinct swelling of the seed. Seeds having a ruptured seed coat that are otherwise sound are only considered sprouted when found in combination with seeds meeting the definition of sprouted.

Regrowth: This is not usually a huge concern. However, canola regrowing under a windrow can get tangled in the swath and pulled into the combine. These high-green plants can reduce separator performance and increase wet green dockage in the sample, which increases the storage risk. Canola plants that regrow through the fall will (usually) die in the winter, but these big dead plants could reduce drill performance in the spring.

Sprouted canola seed — grading guide
Excess moisture has caused some canola to sprout inside pods. There is not much growers can do to avoid this, and combining early is not an option — given the storage…
What causes canola seeds to sprout in the pod?
We know three causes for canola sprouting in the pod. This ‘precocious germination” can occur in these circumstances: After a drought-stressed summer, canola plants may have a lingering hormone response…
Regrowth in swathed canola
Rain and delayed harvest can cause cut canola plants to regrow in some cases. This regrowth coming up through swaths can make for increased green matter going through the combine.…
Quality of canola with wet harvest delays
Canola is generally better than other crops for holding its quality with harvest delays due to moisture. But damage can occur. Here are some quality issues that can occur in…