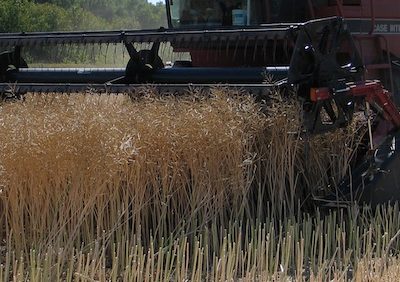 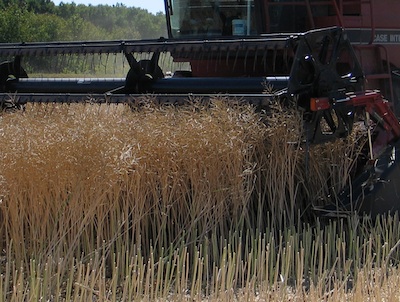 Growers who want to try straight combining for the first time, keep these risk scenarios in mind.

The ideal situation… The lowest-risk canola crop for straight combining canola, especially when trying it for the first time, is well knitted and slightly lodged to reduce potential seed loss through pod shelling and drop. The crop will have most plants at the same growth stage, pods are in good shape (not hail damaged), green weed growth is minimal and disease is low. Read more.

Somewhat higher risk… Straight combining may also be an overall benefit in thin canola. Short or thin crops will not produce a windrow that rolls nicely, and may not have the stubble to hold that windrow and prevent it from blowing. Straight combining eliminates the risk of swaths blowing. More on wind… U.S. research from 2005 saw higher losses with standing canola versus swathed canola for winds under 50 mph. However, findings suggest that as winds get closer to 50 mph, the risk to swathed canola goes up, especially swaths that are cut in a north-south direction. Read more in U.S. Canola Digest, January/February 2006, page 11. (Note: This North Dakota research had overall favourable results for straight combining canola, with higher yields and lower green than swathed canola at most sites.)

Highest risk… Leaving an uneven crop for straight combining may allow more of the later pods to mature and contribute to yield, but the loss risk is higher than it would be for a thin crop that podded over a narrow period (2-3 weeks). A thin stand with two or three phases of podding will put the early pods at risk of shattering while waiting for the later pods to mature. Given that later-formed pods (flowering late July vs. early July) seem to represent the better part of uneven crops in a lot of areas this year, consider the benefit in waiting until these pods are ready. Thin and uneven crops are not the ideal fields for a first experience with straight combining canola. Swathing tips.