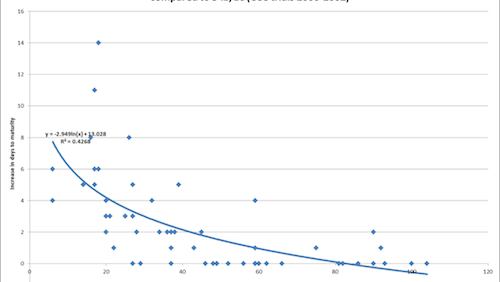 Growers with canola to seed as we head into next week may want to consider the following tips to deal with a shortened growing season.

Start with a look at the average date of first fall frost. This will tell you how much growing season you have left — on average. Click your province for a map showing average dates for first fall frost: Alberta Saskatchewan Manitoba. (Click here for frost probabilities for each station on Alberta’s AgroClimatic Information Service (ACIS) website.) Most fall frosts occur within two weeks either side of the average date for your area. For example, if the first fall frost is between August 31 and September 6, on average, then a variety with 100 days to maturity should be seeded this week to be on the lower risk side for fall frost damage.

Choose an earlier-maturing variety. Switching from a long-season B. napus (Argentine) to an early-season B. napus can gain a week. Switching to a B. rapa (Polish) variety can gain two weeks. If yield potential for Argentine canola is greatly reduced, growing a Polish variety may be more economical – but keep in mind that (1) yield potential for Polish is lower and (2) without herbicide tolerance, weed control can be more difficult. Controlling volunteer canola before seeding is one recommendation. To find earlier-maturing Argentine varieties, use the Canola Performance Trials online tool. Search by days to maturity (DTM) as well as yield.

See the growing degree days (GDD) table below to see the differences between Polish and Argentine canola. GDDs are calculated by averaging daily maximum and daily minimum temperatures for each day, and subtracting the assumed minimum temperature (in this case Base 0) required for growth to proceed. A day with a high of 20°C and a low of 10°C would contribute 15 GDDs on a Base-0 scale.

More on variety choice… A 2010-12 re-seeding study at Western Applied Research Corporation (WARC) in Scott, Saskatchewan may provide some insights on late seeding. Consider that result could be different in a short-season zone. The study found that:
–re-seeding to the same full-season variety in early June resulted in significantly higher yields at 50% of sites compared to the low plant population control (fewer than 4 plants per square foot) seeded in mid May.
–reseeding in early June to a slightly shorter season variety (9350RR) resulted in higher yields than the earlier-seeded low population control at only 25% of site years.
–reseeding to Polish canola did not pay when compared to reseeding to an Argentine variety.
–reseeding in mid June did not pay.

Seed shallow. This is always a good idea, but especially this time of year. Canola seeded half an inch deep can emerge 3 or 4 days earlier than canola seeded deeper.

Increase the seeding rate. A higher rate means a more dense stand, which means less branching and overall earlier maturity. This can gain a day or 2.

Finally, consider the profit potential of other crops. Yield potential for all crops drops with late seeding. Will a lower yielding canola crop provide a better return than a lower yielding wheat or barley crop? Take time to pencil out the economics.

Tips to help canola mature faster
1. Switch to an earlier-maturing variety. Switching from a long-season Argentine to an early-season Argentine can gain a week. Switching to a Polish variety can gain two weeks, but Polish…
Tips to help canola mature faster
Before growers take steps to encourage earlier maturity (some of which may hamper yield potential), they should first calculate whether these measures are necessary. Canola seeded any time in May…
How to help canola mature faster?
Canola seeded in late May and early June will have lower yield potential than canola seeded in early May, and it may run into challenges with timely harvest while farmers…
Late seeding tips
Growers hoping to seed their final canola acres this week or next week may want to consider the following tips to deal with a shortened growing season. Start with a…