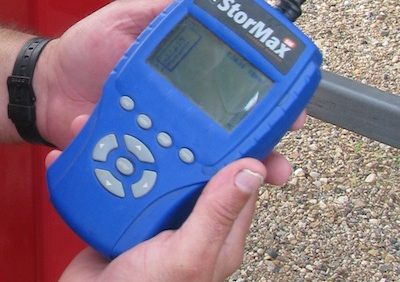 Canola can heat and spoil in the bin, costing growers a lot of lost income. Here are 10 situations that will increase the storage risk:

10. Can’t remember what’s in the bin. Keep a composite sample for each bin of canola. Record average moisture and grain temperature when canola goes in the bin. Use this information, along with a visual assessment of green count and dockage in the sample, to see which bins may be at higher risk.

9. No cables. Bins with cables make it easy to keep tables on temperature. Bins without cables will need to be probed, or turned over with the truck and auger to check temperature. Even with cables, monitoring is still highly recommended.

8. Inaccurate cables or moisture meter. Calibrate the moisture meter each year to make sure it’s accurate. Check a few samples at home and at the elevator to see that they’re the same. Also check bin cables before the grain goes in.

7. Sub-par bin space. With a bumper harvest predicted for many areas, bin space will be at a premium. Not all canola will be able to go on aeration right away. And not all canola will be going into bins originally planned for canola. Make sure canola goes into bins that HAVE NOT been treated with malathion for storage insects. If canola has to go into a ring on the ground, seal the bottom and the top to keep out moisture and make clean up easier.

6. Larger bins. Bigger bins in general will have greater compaction. Tall and narrow bins have the greatest degree of compaction. More compaction means reduced airflow. Note that canola has greater density than cereals, and therefore needs more fan horsepower to do a proper aeration job.

5. Dockage. Insect bodies, plant material, and weed seeds tend to contain more moisture than canola seeds. High-moisture dockage of any type may not be enough to elevate overall grain moisture tests, but if dockage congregates in pockets in the bin, it can create localized hot spots for spoilage to begin. Keep in mind that grain with no dockage can also be at risk.

4. Green canola seeds can increase the storage risk, even if canola is dry and cool.

3. Damp or tough canola. Canola is considered “dry” at 10% moisture, but 8% is safer for long-term storage. Anything above 10% should be dried. Natural air drying — your standard aeration fan — should do the trick if the air is warm with low humidity and if canola moisture is just a point or two above 10%. A dryer may be required for canola above 12%. Keep in mind that a bin’s average moisture might be dry, but a couple tough loads could have gone in, or small areas within each load may have been harvested from weedy slough patches and have higher moisture and higher dockage. These small pockets of moist grain and dockage could create a start point for heating. Link: https://www.canolawatch.org/2011/05/02/tips-for-drying-tough-and-damp-canola/

2. Hot canola. Canola binned hot, even if it has low moisture, low dockage and low green, should still be put on aeration. Target a core temperature of 15°C at harvest time, and watch throughout the winter to make sure it doesn’t start to increase. External temperatures moving from hot to cool in a few days create perhaps the worst situation for safe canola storage. A wide temperature differential between hot grain inside the bin and cool air outside sets up strong convection patterns in the bin. Moisture will be moving and concentrating at the top of the top middle core of the bin. Cool that grain fast.

1. Neglected bins. Growers are busy enough at harvest just getting the crop off, but take time to check all bins within the first two weeks after filling, and then again a couple more times until the canola is cool and winter sets in. Canola seed continues to sweat during the first 4 to 6 weeks after harvest, making this a critical period to move air through the bin and remove that moist air. It cannot always wait until after harvest. Canola can jump from 30°C to 50°C and beyond in two weeks or less.

Listen to a podcast: CCC agronomy specialist Greg Sekulic has tips for putting the crop in the bin during a warm harvest.

Dockage and green elevate storage risk
Know the quality of the canola going in the bin. Green seeds, weed seeds and dockage increase the risk. Even high quality canola can be at risk if stored hot (temperatures are coming back up so don’t let the snow fool you) or at moisture above 8%. Here are the details: Weed seeds. Weed seeds…
Storage risks and bin notes
While combining this year, think about the condition of canola as it goes into the bin. Factors that elevate canola storage risk: Moisture. Moisture creates a more hospitable environment for moulds that trigger heating. Clumping is a sign of mould growth. Storage research found that canola seeds at 25°C and 10.6% moisture clumped together after…
Weeds, green, heat increase storage risk
Weed seeds. Weed seeds tend to contain more moisture than canola seeds, especially if they are green or immature. These high-moisture seeds may not be enough to elevate overall grain moisture tests, but if these weed seeds congregate in pockets in the bin they can create localized hot spot for spoilage to begin — especially…
Condition canola immediately after harvest
All canola should be conditioned shortly after it goes in the bin. Canola that goes into the bin hot is at much higher risk of spoilage, and conditioning will reduce the grain temperature. It will also help to dry down dockage, which may have higher moisture content than the seed. Note that straight combined canola…