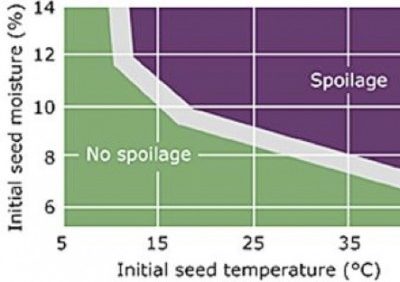 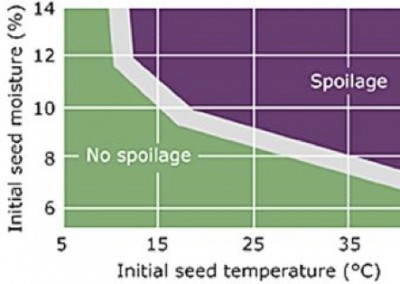 Know the quality of the canola going in the bin. Green seeds, weed seeds and dockage increase the risk. Even high quality canola can be at risk if stored hot (temperatures are coming back up so don’t let the snow fool you) or at moisture above 8%. Here are the details:

Weed seeds. Weed seeds tend to contain more moisture than canola seeds, especially if they are green or immature. These high-moisture seeds may not be enough to elevate overall grain moisture tests, but if these weed seeds congregate in pockets in the bin they can create localized hot spot for spoilage to begin — especially if that canola is also binned hot. Bits of green weed material in the sample increase the risk.

Green canola. Green canola seeds can also increase the storage risk, even if canola is dry and cool. Monitor closely. Small shriveled canola seed counts as dockage but is less likely to increase the storage risk. However, smaller seeded canola will mean smaller air pockets between seeds in the bin. Smaller particles will increase the resistance to air flow.  This makes it even more important to leave the fan on as it will need to work longer to cool the entire bulk.

Hot canola. Canola binned hot, even if it has low moisture, low dockage and low green, should still be put on aeration. This will even out the temperature throughout the bin, and help remove some of the moisture from respiring seed. Even at low moisture, air movements within the bin could concentrate this moisture. For safe, long-term storage, canola should be conditioned with aeration to less than 8% moisture and cooled to at least 15°C.

Keep It Clean! Canola needs to go into bins that were not sprayed with malathion to control storage insects, and that do not have traces of treated seed (any kind) or animal protein (blood meal, bone meal, etc.). These are potential trade issues.