Home / Canola Watch / Root maggot, root disease in back to back canola 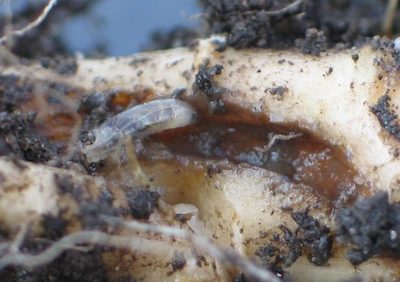 Some growers in the Peace River region are noticing very high levels of root maggots. Root maggots are one pest that can get worse — and in some cases, much worse — in a field with continuous canola. An AAFC study has shown very clearly that with continuous canola, there is a statistically significant increase in crop damage by root maggots. Based on average canola prices, the yield losses quantified in the study were equivalent to $108-$140 per acre after only three years of continuous canola. There are no insecticides available to control root maggot in canola, but providing a one year break seems to make a significant reduction in root maggot losses, the study found.

Root maggots and disease
Root maggots and root disease often show up together in the same field. Root maggots are white and up to 10 mm (half an inch) long — just like maggots. Maggot feeding can damage root crowns and impede water movement, causing wilting. Severe feeding can cause plant death. Severe root maggot damage can occur in…
Root maggot scouting
Root maggots have been found at high numbers in some fields. They can be more common when fields receive a lot of moisture at root elongation stages. Look for plants wilting at early flowering. General wilting is likely environmental, but patches or individual plants could have some other cause. Dig them up carefully and look…
Give the plants a mid-season root check
While scouting canola fields at flowering and podding stages, dig up a few plants in each field and look at the crown and primary root. If the crop has above-ground symptoms, compare the roots of healthy and unhealthy plants. That might help you discover the problem. Blackleg. Use this three-step process to identify blackleg: (1)…
Insect update: Beneficials, CSPW, root maggots
Beneficials. Lygus, bertha armyworm and diamondback moth have a number of natural enemies that will keep populations in check. These beneficial insects may not control an immediate pest threat that has already exceeded thresholds — growers will still have to spray in that case — but beneficials can keep a lid on populations. The key…