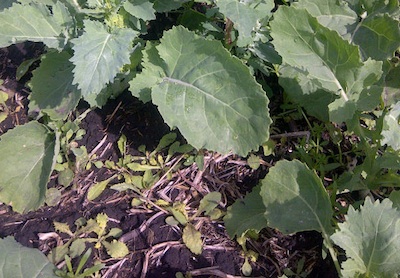 Growers who usually spray twice may not need to spray a second time this year if the canopy has closed, weeds are behind the crop, and the recommended application window is past. The crop should outcompete the weeds all on its own, and the economic yield benefit just won’t be there.

For perennial weeds that have escaped but are delayed relative to the crop, growers may consider pre- or post-harvest glyphosate application as an alternative, especially if the weeds are delayed enough to avoid seed set prior to swathing.

Applications made after the label window (see the handy chart below) can lead to reduced weed control due to advanced weed staging and reduced herbicide contact with the weeds through the increased canola canopy closure.

Late applications can also sometimes cause canola buds to abort, increasing the potential for permanent yield loss. Herbicide tolerant canola is just that — “tolerant” — not completely resistant. Late applications and higher than recommended rates of registered herbicides on HT varieties can cause significant injury to canola crops as well as increase the risk of elevated residues in the marketable grain. Foreign buyers are testing for pesticide residues that exceed registered maximum residue limits (MRLs) or are not registered at all.

Yield loss from late herbicide applications vary on a field by field basis depending on herbicide rate, overall health of the field, and growing conditions during and after the application. Canola under any type of existing stress will likely have greater losses from a late herbicide application. It simply won’t be able to recover as quickly. If canola is healthy at the time of spraying but conditions are hot and dry soon afterward, canola may not be able to compensate by adding more flowers later in the flowering period. Losses cannot be predicted, but they could be up to 30% — and even more in overlap areas.

When would it make sense to apply at a later crop stage? If growers use canola as a clean up crop for narrow-leaved hawk’s beard, round-leaved mallow and other tough weeds, then they may consider a herbicide application after the spray window to be worth the risk of a significant loss in canola yield. Also, if weeds are plentiful, at the same stage or ahead of the crop and the canopy hasn’t closed, these weeds may have a large yield impact. Note however that these large weeds may require a higher rate for control — a rate that may exceed the in-crop maximum for the herbicide. A pre-harvest product is another option to consider.

What is the goal with a late herbicide spray?
Please read the updated version of this article.
Weed competition: The second application
Growers who usually spray twice may not need that second pass this if the canopy has closed, weeds are behind the crop, and the recommended application window is past. The crop should out-compete the weeds all on its own, and the economic benefit of the second herbicide application just won’t be there. Please read the…
Late weed spray costs in more ways than one
Spraying late or at higher-than-label rates can reduce canola profits. AAFC research showed an advantage of 3 bu./ac. for controlling weeds at the 1-2 leaf stage of canola versus the 3-4 leaf stage, and a 7 bu./ac. advantage when applied early versus the 6-7 leaf stage. At $12 per bushel, that early control provides $36…
Weeds: When would a second in-crop application make sense?
A second application of in-crop herbicide is not always economical if the crop is well established, competitive and ahead of the remaining weed population. Please read the updated version of this article.