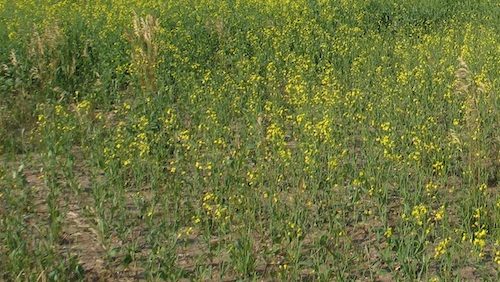 Herbicide carryover damage to canola could present a higher risk this year because of:

The dry fall. Dry conditions can extend the period required for herbicide breakdown, especially if products applied in the fall were on acres not originally planned for canola. (See point 2.)

Last minute rotation changes. Many growers will increase their canola acres again in 2012. If this was a winter decision, then some canola will go on fields not planned for canola when growers did their herbicide applications last year. This could raise some issues with herbicide carryover. Canola going onto pulse or Clearfield stubble, for example, raises the possibility of imazethapyr carryover. Fall applied Heat or PrePass will leave residues that will be damaging to canola.

Weed management on acres unseeded in 2011. Residual herbicide breakdown in saturated soils can be as slow as breakdown in a drought year. And since the very wet spring for growers with unseeded acres was followed by a very dry late summer and fall in many regions, microbial activity would have been halted by lack of moisture shortly after it began. Also, herbicides that break down by hydrolysis (water) — certain group 2s and 5s, for example — may have broken down quickly in wet conditions but perhaps very little if applied after the rains stopped. Look at your herbicide records for fields planned for canola in 2012. Talk to a crop protection company rep for advice on any products that may have higher than expected carryover in those fields.