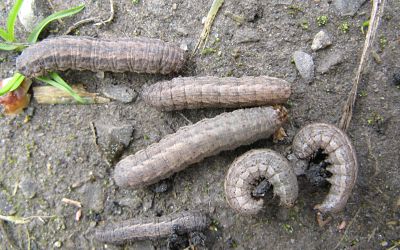 Cutworms are a natural part of the Prairie habitat. Like many pests, they go through cycles of abundance and at times become a more significant pest in Prairie crops. Canola growers should scout emerged canola crops for bare patches, holes or notches in foliage, and clipped plants — telltale signs of cutworm feeding.

Key features: Grey color with light markings down the back that look like tire tracks or a series of “V”s.
Location: All across the Prairies.
Feeding period: Dingy cutworms overwinter as larvae, so early in the season they will be larger than species that overwinter as eggs. They can feed on canola from germination through to late June. (See the cutworm lifecycle table below the Bristly picture.)
Typical damage: You’re more likely to see lost foliage and bare patches, not clipped plants. They tend to be primarily leaf feeders, and rarely cut plants.

Distinguishing features: Look for two reddish stripes along the back.
Location: Dominant species in the eastern Prairies
Feeding period: They overwinter as eggs. Larvae hatch when soils warm up in the spring and will feed through late May and June. (See the cutworm lifecycle table below.)
Typical damage: Young larvae make small holes and notches in the foliage. Older larvae eat into the stems and often sever them.
Need to know: Their populations can be isolated to patches in a field. Patch spraying may be all you need. Pyrethroids tend to work better than other insecticides on redbacked cutworms.

Distinguishing features: Light colored body with a dark brown head.
Location: More a threat in the western Prairie.
Feeding period: They overwinter as eggs. Larvae tend to hatch in May and feed through June. (See the cutworm lifecycle table below.)
Typical damage: These tunnel makers tend to feed underground near the soil surface. Cut plants — plants that have fallen over because their stems are cut through — are signs of pale western cutworms.
Need to know: They tend to prefer drier conditions. Because they are less likely to surface, they can be trickier to control with insecticide.

Distinguishing features: Yellowish with dark stripes.
Location: More common in Alberta and western Saskatchewan
Feeding period: They overwinter as larvae, so they will feed earlier and be larger earlier than species that overwinter as eggs. (See the cutworm lifecycle table below.)
Typical damage: Army cutworms will climb canola plants and feed on foliage.

Distinguishing features: Bristly cutworms have diamond shapes down the back, and two dark stripes along their sides parallel to the diamonds. Bristles on the top and sides are more noticeable than on other species, hence the name. Its full grown length is 21-31 mm, making it one of the smaller cutworms.
Location: All across the Prairies, but 2012 surveys suggest higher numbers in Alberta and Saskatchewan than in Manitoba
Feeding period: They overwinter as eggs and hatch in May, with larvae feeding in May-June.

Start with an above-ground scout of the canola stand. Look for bare patches, holes or notches in foliage, and clipped plants.

Cutworms are nocturnal — they come out at night to feed — and go back underground during the day, so day-time scouting requires digging. In moist soils, cutworms will stay close to the surface. In dry soils, they may go down 8-10 cm (up to 4”).

Dig up soil from a one square foot area to a depth of 10 cm and put it into a basin. Loosen the soil and shake it up to activate cutworms. Also look for frass (cutworm excrement) around roots. Repeat a few times throughout the field.

Try to identify the cutworm species. As described in the “Identification” section, knowing the species can be helpful in fine-tuning the control measures. Also look for orange pupae. (See the photo below.) Cutworms are not feeding at this stage and are no longer a threat to this year’s crop.

When scouting for cutworms, it also helps to think back to last year. Fields that had flowering plants (crops or weed patches) in August or September of the previous year may have higher cutworm counts. These flowers attract the adult moths, which lay their eggs in these areas. This explains why cutworm damage will often appear in patches.

Look for cutworms AND wireworms. Wireworms are another below-ground feeder and can cause similar bald patches to appear in canola fields. All cutworms will curl into a ball. Wireworms do not. Wireworms are straw-colored and do not have a prominent head.

No products are registered (or effective) for wireworm control in canola. If wireworms are the culprit, put away the sprayer and make note of areas or fields where the damage was higher. Remember these areas when planning crops and seed treatments for next year.

Prairie entomologists have set a “nominal” cutworm control threshold of 25% to 30% stand reduction in canola. This is nominal because scientific studies have not been done to provide quantifiable data to support these thresholds. With a stand reduction of less than 25%, canola plants may be able to branch out and compensate for some of the damaged or killed plants. However, if bare patches are developing as a result of cutworm feeding, these should be managed to limit their size, as the complete lack of plants does not allow for any compensation to occur. Spot spraying the patches and the surrounding crop where cutworms are present may be sufficient in these cases.

Current canola seed treatments are not registered for or known to provide adequate control of  cutworms, but many foliar insecticides are registered. Cutworms surface at night to do their above ground feeding, so spray as close to nightfall as possible. Since not all cutworms will surface on a single night, it may take several days before full effect of the insecticide is achieved.

Cutworms do not feed during molting stages — when they shed and grow a new larger skin. This can take up to a week, and 20% to 50% of cutworms  can be molting at any given time. Registered insecticides generally have long enough residues to be active when molting cutworms start feeding again.

Use high water volumes to get good plant coverage. Cutworms need to ingest the insecticide so the more surface area covered, the more likely that cutworms will take in the insecticide.

Cutworm damage will often appear in patches. If stand reduction is concentrated in small areas, a targeted application of a sprayer width or two around that area can be a lower cost and effective way to manage the pest compared to spraying a whole field.

Reseeding lost crop: Many species of cutworms can feed for several weeks, so if they thin out a crop early, reseeding without controlling the cutworms may not be the best solution. If the larvae are young enough that they will not yet have pupated when the new crop emerges, the new crop could also be damaged.

The no-till effect. Minimum tillage tends to create a habitat with a greater diversity of cutworm species, but also of the natural parasites that keep populations in check.  This increased diversity may result in less frequent outbreaks for some species of Prairie cutworms.

Glassy cutworms: A lot of glassy cutworms have been found in the Peace region, but this species tends to feed on cereals and stay away from canola.

Send in samples: Entomologists are surveying both cutworms and wireworms on the Prairies. When scouting, you can get help with identification and contribute to this survey by sending in samples. Put worms in a container with some host plant material (include clean roots if it’s a wireworm; leaves only if it’s a cutworm you found ON the plant; or leaves and clean root material if it’s a cutworm you found IN the soil.) Cutworms can go to the provincial entomologist. Wireworms can go to Bob Vernon at Agriculture and Agri-Food Canada’s Pacific Agri-Food Research Centre. The address is 6947 Highway 7, PO Box 1000, Agassiz, B. C. V0M 1A0.

Cutworm scouting and control tips
Cutworms can leave canola fields with bare patches, clipped plants and large chunks out of stems and leaves. Flocks of birds — crows, gulls, etc. — can be a sign that cutworms are present in large numbers, but nothing beats digging to confirm your suspicions. Cutworm thresholds are based on stand reduction, not actual cutworm…
Learn to identify pest cutworms
Cutworms are showing up in big numbers in some fields across the Prairies, particularly in northeastern Alberta. Check emerged canola crops for bare patches, holes or notches in foliage, and clipped plants — telltale signs of cutworm feeding. At least four cutworm specifies may damage canola: pale western, redbacked, army and dingy. Dingy and army…
Cutworms Appearing
Reports of cutworms (in populations high enough to warrant spraying or to destroy significant acreages where they were missed) have been reported in isolated fields right across western Canada. Cutworm damage often appears as bare patches showing up across the field. Plants in these areas will be wilted or dead and have been chewed off…
Cutworm damage usually patchy
Cutworm scouting begins with a walk through the field looking for bare patches, chewing damage in foliage, or clipped plants. Cutworms and cutworm damage is one thing to look for while scouting this week. If you find patches of missing or damaged plants, dig around healthy plants next to the missing or damaged plants. Cutworms…