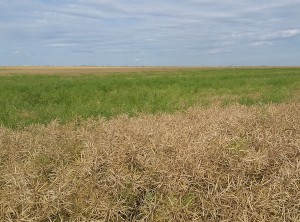 Variable maturity has been noted in several canola fields this year and as harvest approaches, pre-harvest aid options may be considered. It is important to clearly define what is needed, in order for the most suitable product to be used.

Diquat (commonly sold as Reglone or Reglone Ion by Syngenta) is a chemical desiccant that will dry down green growth that it contacts but will not provide perennial weed control. Diquat destroys the membranes of any tissues present, so anything immature before application will dry up and blow out the combine or remain as green seed.   It should not be used in fields with extreme variability.

Also note that since diquat is a contact product that relies heavily on penetration and canopy coverage, using high water volumes (20 imp gallons) and smaller droplets will work best to maximize drydown the stalk material. Since drydown of the stalk is the main driver of application, skimping or cutting corners on application is not a wise decision.

Glyphosate is not an effective drydown option and can result in undesirable residues in the grain if used as such. It is registered for pre-harvest perennial weed control in canola.

Saflufenacil (sold as Heat LQ from BASF) is considered a pre-harvest aid, but it differs from a desiccant and the purely systemic activity of glyphosate, having a degree of both systemic and contact activity. With an earlier application timing and both contact and systemic activity, this product is better suited for a stand with variable maturities.

See a full comparison of all three products HERE.

What to do with uneven fields?
Growers wonder how to approach harvest when canola fields have plants and patches at quite different stages of maturity. With any approach, the least mature areas of the field need to be left to mature. Swathing remains the best and least risky option to manage extreme variation in maturity. When do I swath? As for…
Harvest timing for an uneven field
Canola fields with large areas at different stages lead farmers to ask the inevitable harvest timing questions: When do I swath? Swathing remains the best and least risky option to manage uneven maturity. As for timing, the goal is 60% seed colour change on the main stem, but wait until the least mature areas have…
Harvest options for multi-stage crops
Non-uniform maturation is a common issue at harvest. This issue may be more pronounced in those areas that experienced abnormally dry conditions and intense flea beetle pressure this spring. Swathing remains the best and least risky option to manage uneven maturity. Those set on straight cutting have three product options to consider as pre-harvest aids:…
The Do’s and Don’ts of Desiccants
The ideal harvest aid options will vary depending on your field conditions, harvest plan and weather forecast. Check through these options to see which scenario sounds like yours and which products may be best suited for you. Glyphosate Glyphosate is registered for pre-harvest perennial weed control in canola. Ideally, glyphosate should be applied at the…