Home / Canola Watch / Hold off on lygus at the bud stage 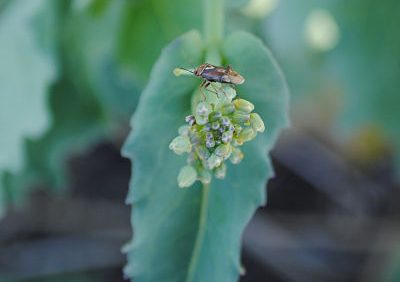 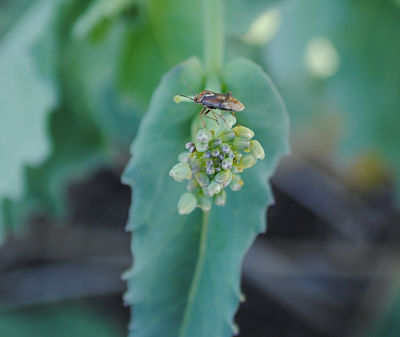 Insecticide to control lygus present at the bud stage of canola is rarely effective or economical, and there is no threshold for this stage. Under good growing conditions, canola can grow through this early damage without any yield loss. In fact, lygus studies show that light early feeding on healthy canola crops can actually increase flowers and pods and, ultimately, yield.

If the crop is under fairly severe moisture stress AND lygus feeding is preventing flowering, an insecticide application may be warranted at the bud stage to preserve yield.

Lygus thresholds are established for late flowering and pod stages, which is when economic loss is more likely. Do counts and check those against the thresholds, and also look for evidence of feeding. Lygus feeding will produce droplets of sap on pods. These droplets, if they’ve been around awhile, may be black and dry.

Adjusting thresholds based on crop health. Hector Carcamo, entomologist with AAFC in Lethbridge, says that at low levels of feeding (under 1/sweep) neither a healthy nor a stressed crop will need protection. However at higher feeding pressures, it is possible that a healthy vigorous crop may compensate for higher feeding pressures, and that only the poor crop may need control at threshold levels of lygus. Rainfall is very important because it will allow the crop to compensate and also can kill small nymphs — a “double positive,” Carcamo says.

Counting nymphs. Small nymphs (first or second instar with no black dots on back) are assumed not to damage the crop so should not be including in sweep net counts. Only count those nymphs that have the noticeable black spots on their bodies. These ones also have the wing buds more developed.