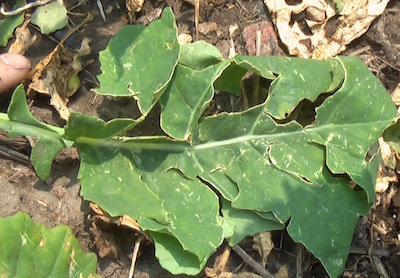 We had a “follow up question” to last week’s article “Hail damage: Economic loss depends on cro stage.” The grower was asking about foliar nutrition after a hail storm. He had 2” of rain a week after a hailstorm and he feels that a foliar application could be worthwhile. The hail hit canola at the 5-6 leaf stage with a lot of main stem breakage. The grower asked for any other information on hailed canola and what he can do to help it recover.

We reached out to a few crop nutrition experts, and here are the answers we got:

“Normally when I consider hail effects on canola, increased susceptibility to attack by disease, insects and possible need for pesticide application first comes to mind as priority consideration. As for nutritional effects, above-ground foliar injury by hail would seem to be a lesser issue compared to something for example that directly affects the roots — such as mechanical injury from tillage, herbicide pruning, insect feeding, disease. I cannot think of what major benefit a foliar application of a fertilizer nutrient could specifically provide, apart from providing some nutrient to enter into the foliage to replace that which was in leaves that were shredded and ended up on the ground. I also become concerned about fertilizer burn from foliar applied N sprays at high rates. So many variables — N status prior to injury, crop stage of injury, nature and extent of damage (broken stems vs leaf shredding etc) — affect the potential response and economic benefit. Especially given the uncertainty as to what one will eventually end up with after an early storm (I have personally been through this a few times), a foliar application of fertilizer on a hailed crop is not what I would choose as a priority spending of my crop input dollars.”

“It is not inconceivable to get a response if hail knocked off a lot of leafs. Added nitrogen could stimulate leaf regrowth, but only if nitrogen is lacking and the crop has decent yield potential. Other questions are, will you have the moisture to stimulate late season growth? Do you have the time in the season to mature the crop? If yes, could get a yield benefit.”

“We don’t have a lot of research on this because it is tough to do a controlled application of hail. There are also so many variables. What percentage yield loss occurred from the hail?  What do they think the yield potential is now? How much N was applied before?  Do they think the rain is building yield potential, or leaching/denitrifying N?  What is the field texture?  Considering that hail is likely to set the crop back considerably, do they think they will harvest it without freezing? Canola recovery from hail can be interesting.  We had hail a couple of times at early flowering where it was crop adjusted at 90-100% loss, but came back to yield over 35 bu./ac., so the crop can bounce better than you’d think. We also had slightly later hail that left us with no yield.  So sometimes you have no recovery.”

“Unless they had severely shorted their initial application of nitrogen and were still expecting excellent yields, I would not expect any specific benefit of foliar applications after a hailstorm.”