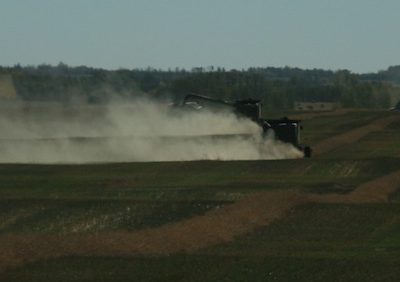 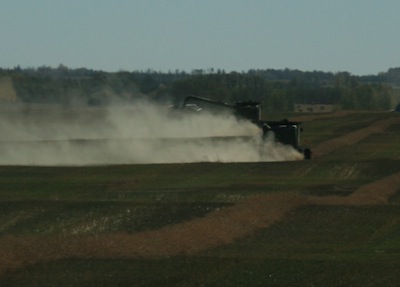 Canola growers often lose 2 bu./ac. out the back of the combine. Losses can easily reach 5 bu./ac. if the combine is pushed beyond its threshing capacity. Every combine will have a sweet spot where the settings and ground speed are just right for the conditions and losses are within the acceptable range of 0.5-1 bu./ac.

The only way to find that sweet spot is to first set the combine concave spacing, cylinder/rotor speed, fan speed, and sieve and chaffer spacing to match the canola harvesting conditions. And then second, to get out and measure the losses.

How to measure losses

Option 1. Large metal pans that match the full width of a combine’s discharge area. The pan attaches under the belly of the combine and releases with the pull of a lever.
Option 2. Make a stick pan with deep sides that you can hold under the back end of the combine as it goes by. Deep sides will limit seeds from bouncing out of the pan. Make it one-foot square to make it easy to use the table below.
Option 3. Throw a pan under the combine. Aim ahead of the rear wheels to capture losses as the combine passes over it. The risks with throwing the pan are that it won’t land flat in the stubble (and not capture a true one-foot sample) or it will land in the path of a rear wheel.
Click here for more on pans.

After choosing a pan, take a sample following these steps:

1. Disengage the chaff spreader and straw chopper and move them out of the way. That way, all straw and chaff drops straight down over the pan. This is important for calculations.

2. Drop the pan, throw the pan, or hold the pan. When using the stick pan, the ideal is to move the pan into position upside down so it doesn’t gather any losses ahead of time. To position the pan, walk behind and to the side of the rear wheels and extend the pan so its in front of the chaff and straw discharge area. Once the pan is in position, quickly flip it over and stop walking. Stand still until the combine has passed over the pan. With this procedure, you get the same result as though you’ve dropped or thrown the pan on the ground, but the handle gives you far more precision when it comes to placement. A long handle helps keep you out of the dust. (The old method of walking alongside the combine using a scoop shovel is flawed in two ways. First, lightweight seeds such as canola will bounce off the shovel or roll out, so the sample is not a true representation. Second, timing becomes a factor when walking while sampling. For example, if you took a sample for four seconds, then made an adjustment to the combine settings and checked the losses again but only held the shovel in place for three seconds, you didn’t get a fair comparison. This method also adds to the risk of injury.)

3. Remove the straw and chaff and preserve only the seed. A screen works. Another method is to put the collected sample in the bottom of a deep five-gallon (20-litre) pail and stick a blower or old hairdryer into the pail. Chaff and straw will blow out and leave the seed behind.

How to calculate loss per acre 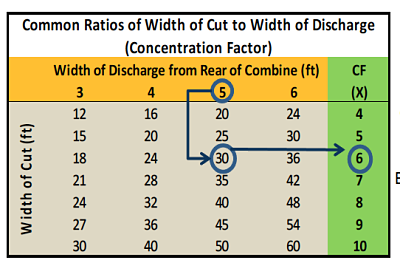 1. Measure the seed in the pan by weight or volume. For weight, you need a small scale that can measure in increments of 0.1 of a gram.

3. Determine the concentration factor (CF) for your combine. This is a ratio of header cut width (swather or combine) and combine discharge width. For example, if the header is 30 feet and the discharge width is five feet, then the CF is “6.” See the table above to calculate your CF.

4. Plug these numbers into the Weighing Method table to get losses in terms of pounds per acre. For example, if the cleaned sample amounts to 6.2 grams per square foot and the combine CF is 6, this converts to a loss of 100 pounds per acre — or two bushels per acre.

Try a few different ground speeds, testing losses for each one.

That also means it will take 2-3 more hours to combine that quarter section. If that’s an issue, with the potential for even greater losses if acres cannot be combined in a timely fashion, growers may want to compute the return on a second combine. With a second combine, growers can take time to find the ideal harvest speed to limit losses to 1 bu./ac., greatly improve their profit margin, and still finish the field faster than they would with just one unit.

As retired CCC agronomy specialist Jim Bessel says, “Growers spend a lot of time and input bringing their canola to maturity. And then at this harvest stage, they get antsy with the combine throttle and don’t realize how much they’re throwing away.” See the video below for more from Jim on this topic.