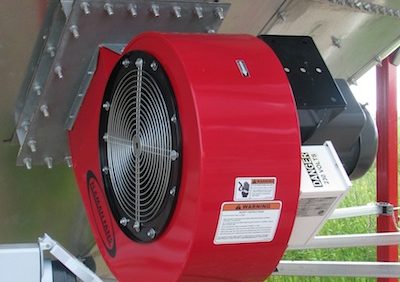 The ideal goal for safe long-term storage is to have canola rest in the bin at 8% moisture and less than 15°C.

No matter how good the harvest weather or how dry the harvested crop, all canola should be conditioned after it goes into the bin. 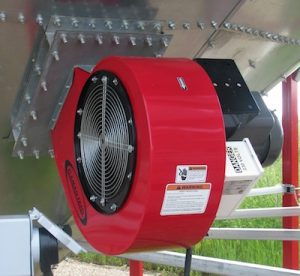 For tough and damp canola, the spoilage risk is much higher. Canola is considered “tough” at moisture levels between 10% and 12.5%. “Damp” is anything above that. With tough canola, aeration with adequate airflow can be enough to dry it to safe storage levels as long as air has capacity to dry: warm with low relatively humidity (RH). At RH values above 70%, the equilibrium moisture content will be above 8% to 9%, meaning sufficient drying for safe long term storage is difficult to achieve. Drying canola with aeration alone also requires sufficient air flow* and time to move the drying front to the top of the grain mass. Damp canola will require heated air drying and rigorous management to condition it for safe storage. (See more on how to handle very damp canola.)

Dry canola as soon as possible. While waiting, aerate continuously if possible and move damp canola back and forth between storage facilities to prevent spoilage. The combination of aeration and movement is ideal.

Have the right equipment. Continuous flow or re-circulating batch drying systems are preferable. They reduce the potential for seed damage from heating and allow for slightly higher drying temperatures. For very damp canola, growers may prefer to run the grain through twice at a lower temperature to prevent seed damage and reduce the risk of fires. Also, if the dryer has screens, make sure the screen size is small enough to hold canola. Another option is to add heat to a bin aeration system. Talk to your bin and fan supplier for details.

Watch drying temperatures. Check the maximum safe drying temperature for your system, then reduce it by 11°C when working with damp canola as opposed to tough. As moisture content increases, it gets much easier to “cook” your canola in a heated air drying system.

Over dry canola slightly when using heated air. As grain cools when moved into storage, moisture content tends to rebound slightly. Over drying compensates for this. A general rule is to over dry by 0.1% for every point the grain is dried. For example, if canola is at 14% moisture and your target is 9%, over dry by 0.5 percentage points to 8.5%.

When returning warm, dried canola back to the bin, turn on the fans to cool it for safe storage. This could also allow for a bit more drying as drying can occur when cold air is introduced to a warm mass of grain.

Natural air drying (NAD) using aeration fans with adequate airflow can work as long as air has capacity to dry. NAD for tough or damp canola is not usually effective under late fall conditions when canola and outside air are both cold. In these conditions, reaching dry equilibrium moisture levels often takes too long to avoid spoilage in many cases.

Adding heat to an aeration system. The general recommendation for this method is to increase air temperature to no more than 15-20°C. PAMI storage researcher Joy Agnew notes: “Hotter is NOT always better when using natural air drying with heat. You must match heat addition with your fan capacity. The more cubic feet per minute the fan blows, the more heat you can add. With typical NAD fans, a temperature increase of 10-20°C is max.” Also ensure fan airflow rate is sufficient for moisture removal — 1.0 cfm/bu or higher. Ensure the air is heated adequately. There’s no point in heating air if the amount of temperature increase won’t accomplish drying. Read Agnew’s Supplemental Heating FAQs

Can your fan move enough air? When conditioning tough or damp canola, make sure your aeration fan is the style and size to work effectively with the level of grain you’re attempting to condition. Insufficient air flow can result in a high moisture zone near the top of the bin that can initiate spoilage. The greater the depth of canola in the bin, the more fan capacity you will need to move air through it effectively. Large diameter bins that provide uniform air flow through a perforated floor may have an advantage when handling damp grain. If you suspect the air flow is insufficient, remove some canola to reduce the depth. This offers two other benefits: It disrupts any high moisture areas that are developing. And it can flatten the cone, making the depth of grain more consistent throughout the bin.

Ventilate the bin. Proper ventilation at the top of the bin to allow for escape of the warm moist air is very important, especially for large bins and especially when adding supplemental heat since the moisture removal rate is so much higher when heat is added. Inadequate ventilation in the headspace will result in condensation on the top layers of grain.

What about blending dry and damp canola? If considering blending in an attempt to bring damp canola down to tough, be very careful. It is possible you could just be putting your dry canola at risk, as the transfer of moisture from seed to seed is a slow process.

Monitor regularly. This is good advice for all canola. Be extra careful with canola that goes into the bin warm and tough this week.

Canola harvested at 15-20% moisture can be dried to a safe storage level given the use of hot air drying or supplemental heat but it should be done immediately after harvest as damp canola is at very high risk for spoilage. Even if temperatures are cold at harvest, spoilage can happen quickly with any spike in outside temperatures. When using a dryer, the recommendation is to remove no more than five percentage points of moisture per cycle, so canola above 15% moisture will required two runs through the dryer. Given how long it can take to dry canola to that extent, farmers may need a harvest plan to manage the drying process as the combines and trucks are rolling. Make sure damp canola (like all canola) goes on aeration immediately after harvest while waiting for the dryer.

Farmers putting damp canola into bags, note that this is a high risk situation especially given the likelihood that warm days, which can quickly warm up canola at the edge of the bag, are still possible before winter. Read more on bag storage of canola.

In recent years with delayed and challenging harvest conditions and no in-bin drying potential, producers have opted to cool and eventually freeze bulks of canola to store over the winter. This strategy has worked quite well for producers who have taken advantage of warmer, longer days in the spring to accomplish drying with NAD.

Anecdotally, it seems that canola over 15% can have too much free moisture and actually freeze into a solid block, creating obvious flow issues.