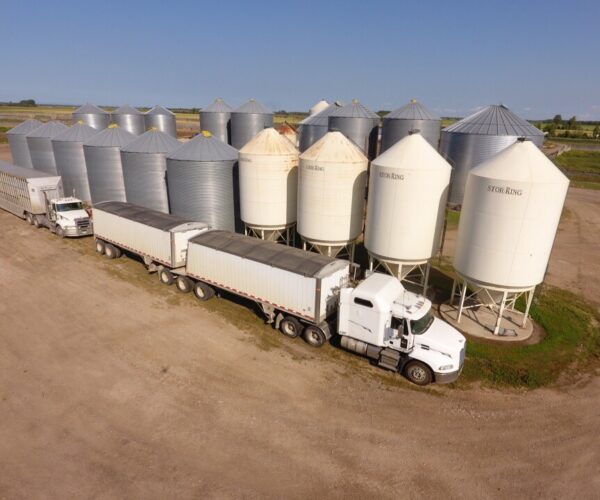 Growers all know that maintaining seed quality and avoiding spoilage are key goals of canola storage. To achieve these goals, there are seed parameters (such as oil content, quality, temperature and moisture), bin factors (bin size, fan type and size, quantity, etc.) and environmental considerations (air temperature, humidity, etc.) to manage for varying storage lengths through various seasons. This blog further investigates some of these factors and the impact they have on stored canola in various scenarios.

The ‘Long-term storage of canola‘ study led by Nathan Gregg examined the effect of seed moisture content and storage temperature on canola seed oil quality. Samples of clean, standard, green, and high oil content canola seed from the 2009 growing season were conditioned to seven different moisture contents and stored in environmental chambers (converted from upright freezers) to provide five different temperature test conditions (-5oC, 5oC, 15oC, 25oC, 35oC) for approximately four months. The temperature within each of the 140 samples was monitored for an increase that might indicate spoilage.

After two months of storage, the samples were physically inspected and tested for acid value, free fatty acid, peroxide value, and P-Anisidine value. These values were then compared to initial base samples to determine if oil quality had changed. Interestingly, although there was no indication of spoilage based on temperature and limited oil quality reduction (oxidation and oil quality deterioration processes had begun but not exceeded tolerance limits), physical inspection showed there had been spoilage in the form of mold growth in several samples (especially in the 25°C and 35°C environments). When these samples were disturbed, clumps were evident and a musty odour was present.

Therefore, these long-term canola storage conclusions were made:

The effect of canola compression under its own in weight in tall bins was also examined in the ‘Long-term storage of canola project. Samples of standard and high oil content canola were monitored under a compression load of up to a 30.48 m (100 ft) column of grain (to simulate pressure in a tall bin), and compressed displacement were recorded. Samples were visually inspected for signs of seed damage and seed shape/deformation, oil exudation, displacement under compression, and seed germination tests were conducted. None of the tested samples showed any negative effect due to the compression.

Conclusions from this compression experiment include:

Therefore, storage of high oil content canola in tall bins does not appear to be a risk to seed integrity, based on these tests. However, different moisture content, temperatures, seed varieties, etc., may produce different results.

The small-scale study compared high oil canola and a standard canola variety (cultivar) stored at eight, 10, 12, and 14 per cent moisture content inside environmental chambers at 10°C, 20°C, 30°C and 40°C for up to five months. Samples were removed from the containers every two weeks and tested for germination rate, visible mould, and free fatty acid values. Results reported that after, 20 weeks of storage, canola with eight, 10 and 12 per cent moisture stored at 10°C and 20°C did not have significant quality changes, no matter the oil content. In addition, these findings from were reported from the small-scale study:

In the large-bin study, canola was loaded into three flat bottom bins inside an environment-controlled room and was initially aerated with humid air to bring the seed moisture content to 10 per cent. Notable results and conclusions from this large-bin study included:

The results from the physical properties study reported that:

For more details on this study see the project summary page.

Even though they may not be used by all growers or in all years, Boyle and Stonehouse’s ‘High moisture canola in bags‘ research reported some interesting findings that could be applicable for any type of canola storage.

The main bag storage recommendations generated based on the results of this study include:

However, it was also noted by the research team that there is a need for more detailed research comparing bin and bag storage of canola, as well as revisit recommendations, given the increasing oil content of new canola varieties.