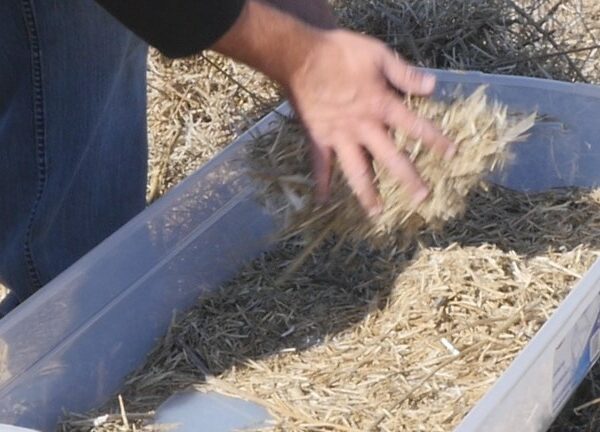 Efforts toward genetic improvements, equipment improvements and more specific harvest timing all help maximize canola yields at the end of the growing season. Research on these advances and investigations are summarized in this blog, along with some resources and tools to help growers and agronomists integrate them on farm.

Straight combining was still in early stages of being adopted in 2011, when Holzapfel’s ‘Quantifying genetic difference in seed losses due to pod drop and pod shattering in canola‘ project began, in hopes to contribute to more knowledge to successful straight combining of canola.

The objectives of this research were to:

Yield losses due to pod shatter and pod drop in field trials were examined at optimal harvest stage (seed dried to 10-12 per cent moisture content with two or less green seed) and delayed harvest dates (3-4 weeks after optimal timing) for fifteen canola varieties (which had 90 to 106 day maturities) at four Saskatchewan locations (Indian Head, Scott, Swift Current and Melfort) over four growing seasons (2011 through 2014).

Averaging 42% overall, pod drop was an important contributor to environmental seed losses in this study, but
also largely affected by environment ranging from 12-60 per cent at individual sites.

Key findings from this research include:

Learn more about canola pod drop and pod shatter video and at CanolaHarvestManagement.ca.

Conclusions to implement on farm

Canola harvest losses across the Prairies

In the ‘On-farm survey of combine grain loss in canola across Western Canada‘ project, PAMI visited 31 producers across Alberta, Saskatchewan and Manitoba, and measured canola combine losses in-field from 50 combines (which represented six combine manufacturers and 40 different combine models). Drop pans provided by Bushel Plus and Schergain were used to measure (three replicates) of the combine losses when producers ran machines at their normal operating speed and conditions.

Variables that were found to have a significant impact on canola combine losses during the 2019 combine loss testing are shown in the table. No significant differences were observed on all other variables investigated.

Results to apply on farm

The age of the combine doesn’t necessary impact canola harvest losses, based on the results. A well-set older combine can outperform a poorly set newer combine, in terms of losses.

This project highlights how important it is for producers to set their combines for current weather conditions and to use loss measurement as a way of verifying these settings. Producers also need to reassess combine losses as conditions change throughout the harvest day and season.

Tools and resources to help at harvest