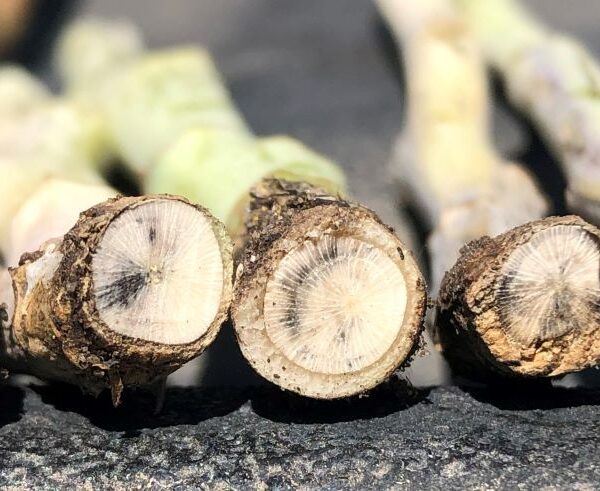 Blackleg is a disease in canola that is a potential concern every year and can cause serious yield losses. As stated in the CCC’s Blackleg management guide, blackleg disease of canola is caused two fungal species: Leptosphaeria maculans (an aggressive species causing infection from the seedling stage onward) and Leptosphaeria biglobosa (a less aggressive species that is often associated with upper stem lesions and doesn’t typically contribute too much to yield loss in Canada).

The CCC’s Blackleg management guide uses an integrated management strategy, referencing several helpful tools, to outline the four levels to understanding and minimizing the risk of blackleg damage and how to manage it. The first two levels of this strategy are understanding the disease and determining the blackleg severity of a canola crop (while scouting). The CCC’s blackleg disease cycle graphic can be referenced for both of these priorities.

It explains that after L. maculans overwinters on infected canola residue, the blackleg disease cycle can be considered to begin in the spring with the release of ascospores (and potential infection of canola cotyledons). The cotyledon stage is most critical stage of infection, where the fungus moves into the stem base and progressively damages the crop. However since symptoms are most obvious later in the season, when canola is at ~60% seed colour change, blackleg disease scouting is recommended just prior to swath timing. See the CCC graphic shown for more details.

The last two levels of the integrated management strategy make several references to genetic resistance, which emphasize the importance of it. Level three is learning and implementing best management practices that can reduce blackleg risk level – which includes a recommendation for planting resistant (R) or moderately resistant (MR) cultivars and a recommendation for rotating use of resistance sources in cultivars. The final levels explains the blackleg resistance identification system – including the major gene (seedling) resistance and quantitative (adult plant) resistance.

The importance of genetic resistance in canola cultivars is also represented by the number of blackleg-related research projects which are carried out on various aspects of this topic. Results and recommendations coming out of a few of the more recent studies are summarized below in support of the four levels of effective blackleg management.

Background on blackleg populations in Canada

Peng’s ‘Analysis and monitoring of Leptosphaeria maculans race dynamics in western Canada for effective blackleg resistant management strategies’ research report also acknowledged that cultivar resistance – along with crop rotation – in western Canada were key to the successful management of blackleg during the 1990s and 2000s. However there has been increased prevalence and severity more recently, which is potentially related to pathogen population shifts and tighter crop rotations. In 2012, a large number of fields with resistant (R) or moderately resistant (MR) cultivars were found with severe blackleg, especially in southern Manitoba and parts of Alberta. This breakdown may have been due to changes in pathogen producing virulent races that can overcome the R genes in canola cultivars.

However, Peng’s report points out that in order to deploy R genes effectively, the pathogen race composition (the Avirulence profile or Avr profile) and dynamics needs to be known. Fortunately, blackleg race identification and monitored work was initiated in 2007 using nine “Westar” trap plots, and found that Avrlm1 and AvrLepR2 were generally low in the pathogen population while the other Avr genes were at moderate to high levels. Another study using samples collected from commercial fields in 2010 and 2011 found that populations of AvrLm3 and AvrLm9 had decreased substantially from previously observed levels, and AvrLm7 had increased.

Building on those projects, the ‘Analysis and monitoring of Leptosphaeria maculans race dynamics in western Canada for effective blackleg resistant management strategies’ study aimed to analyze and monitor the Avr profile using Westar trap plots for regional pictures of Avr frequencies in the pathogen population.

As noted in previous research, most canola cultivars grown in Western Canada carry the specific (major gene) blackleg resistance (R) genes Rlm1 and/or Rlm3. But Peng noted that recent field monitoring data indicated that some of these R genes are no longer effective. Despite this, severe blackleg damage is still uncommon on these resistant cultivars, suggesting additional resistance mechanisms, known as quantitative resistance, may be present.

Researchers took three blackleg-resistant canola cultivars carrying Rlm1 and Rlm3 and inoculated them with virulent isolates of Leptosphaeria maculans that should overcome these two major resistance genes. The cultivar Westar was used as a susceptible control.

As previously noted, despite all canola cultivars registered in Canada having good levels of resistance to blackleg disease, Leptosphaeria maculans can rapidly overcome resistance. Repeated use of the same canola cultivars (which isn’t recommended) can speeds the fungus’ adaptation to resistance genes. However, simply changing cultivars may be ineffective because producers have no way of knowing which resistance genes they are deploying.

The goal of the Development of canola cultivar blackleg resistance groups: feasibility  project was to determine if canola cultivars could be grouped based on their susceptibility to different L. maculans populations. The approach that was used involved inducing spore formation on the crop residues and pooling spores from many fungal fruiting bodies to represent the combinations of L. maculans strains present in field.

Result from this study implied resistance grouping may not be feasible. Therefore, labelling of individual genes, as is starting to be implemented by the canola industry, will allow growers to rotate major genes, while still taking advantage of quantitative resistance. Read more on the research summary page.

Optimize blackleg management on your farm

As noted in the CCC’s Blackleg management guide and supported by the research above, these best management practices can reduce the risk of blackleg:

Canola growers can also sign up to be part of provincial disease surveys.

Check out the summaries for these blackleg-related research projects:

All other blackleg-related research projects are available here on the Canola Research Hub.