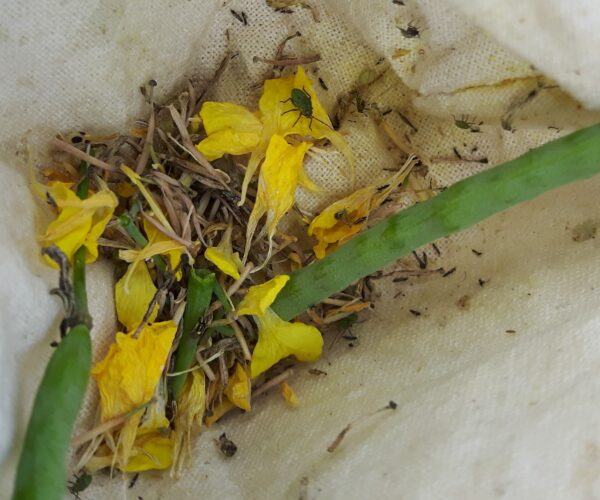 The lygus bug’s piercing and sucking mouthparts allow it to feed on canola crops, but the proper management of lygus requires several considerations. First, the growth stage of the canola crop and the stage of lygus bug development both need to be accounted for when scouting for the insect. Then, pending the majority of the crop being at the early pod stage, and the lygus bugs are at the late (ex. fourth and fifth) instar or adult stage, the new economic threshold should be used to make a decision about a potential insecticide application at the early to mid-pod stage (considering pollinators and beneficial insects if an application is required). Since the thresholds have changed over the last few decades as research has provided new insights into the complexity of this insect, growers and agronomists should ensure they are using the current threshold of 20-30 lygus bugs per 10 sweeps, when using proper sampling techniques.

In 1994, Wise and Lamb reported that lygus bugs were a newly recognized pest of canola in western Canada. They observed that lygus bugs feed on the growing points of canola plants and can cause damage to canola particularly when they attack pods and feed directly on developing seeds. The damage is usually invisible to the growers, but may result in a lower than expected yield. Although there is no doubt that lygus bugs can be damaging to canola, it has been difficult to estimate how many lygus bugs it takes to cause economic losses.

Their Estimating the abundance of lygus in canola fields project in 1994-1995 resulted in the development of an efficient sweep sample method that allows producers to efficiently assess the risk of lygus damage and minimize yield loss and control costs, resulting in yield savings of up to about 20 per cent in some fields, at the time. This method involves 12 twenty-sweep samples (or less) per field, taking no more than 30-45 minutes to complete. Further details on this area available on the project page.

Knowing that lygus bugs can cause damage to canola, but understanding that canola has the ability to compensate for herbivore damage, Jones’ research team completed a study which asked: Does canola compensate for lygus bug damage?

To address this, they studied plant architecture, seed yield and other vegetative and reproductive attributes potentially involved in compensation, in two experiments manipulating density and duration of infestation of lygus bugs during the bud through bloom period. The results showed that:

Therefore, where growing conditions allow compensation for bud damage to occur, early-season populations of lygus bugs feeding in canola during bud through flowering stages were found to not pose a threat to yield (and can even benefit yield).

Almost a decade later, the four-year Management of lygus bugs and seedpod weevil in canola at the farm level project (2010-2014) in Alberta investigated the best practices for managing a combination of CSPW and lygus bug as a pest complex.

Insect management recommendations based on this study include:

Cárcamo’s 2013 Improving lygus management for current canola and faba bean cultivars research suggested that the current economic threshold of one lygus per sweep at the early pod stage was too low. For Lethbridge, canola yield losses didn’t warrant control until lygus reached ~3 lygus per sweep. While the threshold was determined to be ~2 per sweep in the Lacombe region. The results from Beaverlodge were less conclusive, but a similar impact of lygus on canola was observed.

It was determined that significant economic returns could be realized by spraying when counts surpass three lygus per sweep in southern Alberta. But results indicated that in a normal year with sufficient rain (>120 mm in June and July, normal mean temperature under 20°C in July) lygus bugs at such low abundances (one /sweep) do not pose a yield risk. If spraying isn’t need, canola production costs would be reduced and there would be positive repercussions for pollinators and other natural enemies which provide beneficial ecosystem services.

Building on his previous research, considering previously-supported thresholds, and the limited data on spraying at the mid-pod stage, Cárcamo carried out the Validation of lygus and other insect pest thresholds in commercial farms throughout the Prairie Provinces project. In addition to lygus, other insects such as flea beetles at the seedling stage in humid sites, cabbage seedpod weevil in southern Alberta, diamondback moth which also require monitoring and potential control actions, were considered in this research.

The key findings and subsequent recommendations that came out of this work, included:

Lygus resources for growers and agronomists