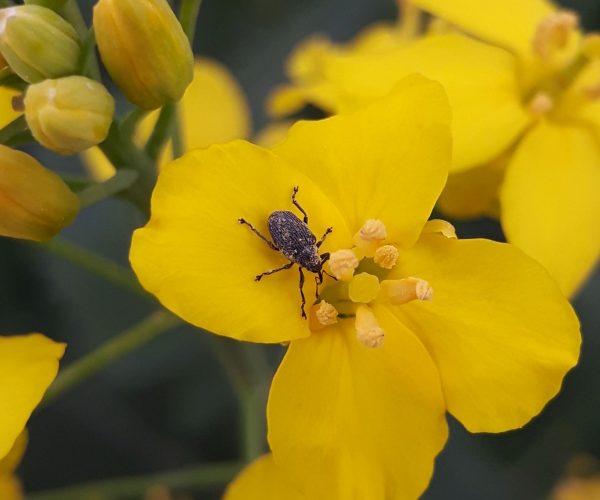 The cabbage seedpod weevil, Ceutorhynchus obstrictus (Marsham), which originated in Europe, was first found in British Columbia in the 1930s and has since increased its range into the Prairies. The beetle (from the family Curculionidae) consumes several plants from the family Brassicaceae, including canola (Brassica napus). At high populations, can have a significant impact on yield, making it of interest to many growers and agronomists in the Canadian canola growing region. Read more on this here.

Cabbage seedpod weevil was first reported in Alberta canola fields in 1995. Outbreaks of the weevil in Alberta in 1999 and 2000 prompted the beginning of research on this insect. This included examining the biology of the insect, the impact of it on canola crops and management strategies to monitor and potentially control it in western Canada (where large areas of host crops are grown).

Dosdall’s Biology and Control of the Cabbage Seedpod Weevil, a New Pest of Canola in Alberta project generated many valuable findings, which could be applied to a number of practices that growers and agronomists can carry out. These include:

Based on the biological findings of this insect, Dosdall’s report suggested subsequent research explore control strategies such as trap cropping, fall seeding, altering seeding rates, row spacing and fertility regimes and seeding rates, to determine additional options that could be effective for canola growers.

For tips to use when scouting canola and considerations for growers and agronomists when making decisions and planning control options, see this Canola Watch article.

Since lygus bugs and cabbage seedpod weevils are both found throughout the canola growing region, the relationship between these two pest insects has been investigated. The Management of lygus bugs and cabbage seedpod weevils in canola study examined this relationship, but due to one year of data that was impacted by drought, suggested that further research was needed to confirm the results. Cárcamo’s Management of lygus and seedpod weevils in canola at the farm level project reported there was no indication that having the two pests at moderate numbers increased the risk of higher yield losses compared to fields with only high numbers of seedpod weevils.

More pest and beneficial insect studies are available on the Canola Research Hub.