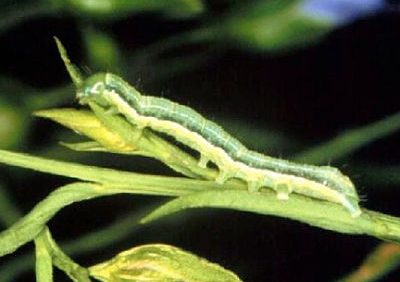 Before spraying, make sure your canola is at the right stage to be damaged by the worms and that the worms are actually the species you’re trying to control. Here’s how to distinguish the five most common green worms in canola. (Photos at the bottom.)

Bertha armyworm. Berthas come in brown, black and green shades. The green berthas are shinier than other green worms, and the yellow-orange stripe along each side is more pronounced, even on younger ones. Mature larvae are up to 1.5” long, making them considerably larger than diamondback moth larvae at late stages. Being part of the cutworm family, they also curl up when agitated. While cabbageworms tend to stay on the leaves as long as leaves are available, bertha will move up into the pods earlier. Find results for adult (moth) traps here: Alberta map and details on the risk levels. See Saskatchewan’s bertha info and downloadable map. Read the Canola Encyclopedia for more on scouting and thresholds.

Clover cutworm. Clover cutworm is easy to confuse with bertha armyworm. They are about the same size when mature (1” to 1.5”). They can both be green or brown, even black. They both have stripes down the side. The key differences are that the clover cutworm strip is pink and the bertha stripe is yellow or orange, and that clover cutworms cycle earlier. They are large at this stage of the season, often mature and starting to pupate, while bertha armyworm, if present at all as larvae, will be tiny. People are noticing clover cutworm this week, thinking they’re berthas, and wonder if they should be on high alert for berthas already. Manitoba Agriculture’s provincial entomologist John Gavloski says that in rare cases, clover cutworms can cause economic levels of damage in areas within a canola field. But in most instances, levels are lower and spraying is not usually worth considering. Read more.

Imported cabbageworm (larvae of cabbage butterfly). These worms are light green with a lemon-yellow stripe down the middle of the back (dorsal side). They are covered with short hairs giving it a velvety appearance. They grow to about 30 mm. Cabbageworms look more like diamondback moth larvae than bertha armyworms, but are more docile than diamondback moth larvae and less spindle shaped. As long as there is good vegetative growth, they feed mostly on leaves and it is not usually economical to spray them. Some growers have reported 8-10 per plant, but before spraying, check regularly to see if damage ceases over the next week. Cabbageworms have 2-3 generations per year and will go into pupal stage quicker than the other two larvae. Most cabbageworms in southern Alberta are infested with parasitoids, so they feed less and die before pupating. Read more.