Ideally, growers will want to put canola on aeration as soon as it comes off the field. Cooling hot grain within the first 24 hours is important for safe long-term storage. Removing moisture that sweats from all canola — but especially tough canola (10-12% moisture) — is also important. Conditioning achieves both of these steps.

Here are a few handy tips:

2. Cooling canola is critical to ensure the seed stays at a safe-to-store condition. Cool air will more rapidly reduce the temperature in a bin…therefore if cooling hot canola is the goal, consider turning off the fans during hot days. Whether or not to run aeration fans depends on many factors, including air temp, air RH, grain moisture content and grain temperature. When in doubt, run the fans to cool the grain.

3. If drying is the goal… The bigger determining factor in natural air’s drying power is the temperature. The key is actually the temperature difference between the canola and the outside air. As long as the outside air temp is lower than your canola, then drying will occur. Cool air and warm grain can provide decent drying results. PAMI provides these four quick reminders on the relationship between air temperature, grain temperature and drying:

The chart below from PAMI shows water holding capacity of air based on temperature.

4. Further to point 3, note that very little moisture movement or removal occurs when the air and grain temperature drop below approximately 5°C. So if the canola goes into the bin at 15°C and tough (let’s say 12%), cooling it to 5°C will certainly pull out some moisture, but may only take it to 11%. Cooling it further will help reduce the risk of spoilage, but it’s unlikely to dry it much more. Now the producer may have to deal with cold (still tough) canola in the spring. At that point, the best thing to do would be to sell it as-is (as quickly as possible) or run it through a heated air dryer. Because putting warm air through cool grain is very likely to result in condensation in the bin.

5. Very tough or damp canola will have increased storage risk and probably should be dried with heated air. Storing tough canola very cold can reduce the risk, but the risk is still higher than it would be for canola stored at 8% moisture.

6. Airflow rate is key for aeration and natural air drying of canola. A bin of canola generates a high static pressure (or resistance to airflow) which results in a lower airflow rate from the fan. For temperature conditioning, you need 0.1 to 0.2 cfm/bu. To efficiently remove moisture from the seed you need 0.75 to 1.5 cfm/bu. The old rule of thumb to have 1 hp of fan power per 1,000 bu is misleading, particularly for the larger bins that are more common today.

7. Larger bins that are filled over a few-day period due to intermittent harvesting in less than ideal conditions will have areas of various moisture levels and temperatures. Don’t wait until the bin is full to turn on the fans.

8. On cool days, take a load or two out of bins and leave them on trucks overnight. This will help cool the bin and the turning activity of removing the central core of grain can help reduce spoilage risk.

9. Always remember to Keep It Clean by avoiding the use of malathion prior to storing canola. 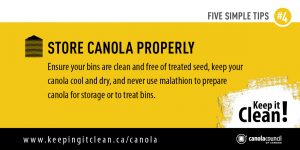 *Thank you to Joy Agnew with PAMI and Ron Palmer with IHARF for their contributions to this article.

Ron Palmer does grain storage research with IHARF. He writes:

Using low humidity air is good for drying, but the problem is how do growers know the air has low humidity when the weather report only tells them RH? Because of this, Tip 1 above is only a basic guideline.

To explain Tip 3 above, we go back to the relationship between temperature and RH. Cold air cannot hold much water. For example, let’s say saturated air at 10°C can hold 0.2 grams of water, while at 20°C saturation might be 1 gram and when air gets hot it can really hold water. Now here is the kicker and why so many people are confused! Let’s take air at 30°C and 50% RH. Most people without a thought would say that is nice dry air — great for drying. Wrong! That air has a humidity of 5 grams. It is holding a lot of water. Now let’s compare that to air at 10°C and 80% RH. It sounds like wet air, but it can only hold 0.2 grams at saturation (100% RH). So at 80% RH, that 10°C air holds 0.16 grams of water. It indeed is not bad air to blow over your canola, it is actually dry air.

Now here is the other strange thing: If you take that cold air at 80% RH and you put it into your bin with canola at 20°C, the air will warm up to 20°C almost immediately because the canola is so much more dense. The cold air that contained 0.16 grams of water per cubic meter still contains 0.16 grams of water when it warms up. BUT since 20°C air has a much higher water holding capacity — 1 gram per square meter — that 0.16 gram of water in air at 20°C converts to an RH of only 16%. This air definitely has drying power.

Conditioning tips for stored canola
Ideally, growers will want to put canola on aeration as soon as it comes off the field. Cooling hot grain within the first 24 hours is important for safe long-term storage. Removing moisture that sweats from all canola — but especially tough canola (10-12% moisture) — is also important. Conditioning achieves both of these steps.…
Spring warm up for stored canola
Latest News
Canola to be stored on farm through summer will be safer if warmed up before outside temperatures get hot. “The goal is to reduce the temperature differential between stored canola and the outside air,” says Angela Brackenreed, agronomy specialist with the Canola Council of Canada. “This reduces the amount of moisture movement within the bin,…
Tips for drying tough and damp canola
The ideal goal for safe long-term storage is to have canola rest in the bin at 8% moisture and less than 15°C. No matter how good the harvest weather or how dry the harvested crop, all canola should be conditioned after it goes into the bin. For tough and damp canola, the spoilage risk is…
Canola storage research: Summer tips
PAMI, with funding from the provincial canola growers organizations, is running a storage project this summer to test the best management practice for canola bins as they move from winter to spring to summer. Should they be turned to warm them up? Aerated to warm them up? Or left alone so they stay cold for as…