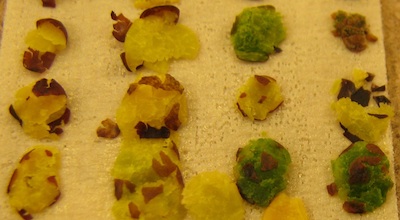 What causes high green? Most green seed issues result when heavy frost hits canola before the seeds mature. This permanently stops the chlorophyll-clearing process and locks in green. Nothing can be done to reduce this green. In other cases, cutting canola too green or in hot weather that leads to fast dry down can trap green in the seeds. This green can clear if the canola has not experienced a frost and the seeds are re-wetted and warm – which can restart the enzyme process.

Will it clear? Frost stops the chlorophyll-clearing process in canola seed — usually permanently. High green counts are likely in fields that were not fully mature when hit by a heavy frost. But if pods lower in the canopy were not hit hard by frost, seeds in these pods may continue to cure naturally and clear the green. Green that was not locked in by frost can still clear, at least to some degree, over time. Read the more detailed article.

Why is green seed a problem for processors? Green canola seed usually has issues other than just high chlorophyll levels. Canola delivered with high levels of green seed was probably swathed immature or was frozen before it had a chance to fully cure. Therefore canola with high green seed content also tends to have smaller seeds, more damaged seeds and a lower overall oil content per tonne of seed delivered. High amounts of green chlorophyll in the seed also increase the processing cost because the chlorophyll must be removed to produce the light-coloured oil customers expect. Processors use a clay filtration process, adding “Fuller’s earth” or “montmorillonite clay” to the oil. Chlorophyll molecules bond with the clay particles. The clay is then filtered out, taking the chlorophyll with it. Canola oil with higher chlorophyll content will require more clay and possibly more passes with the clay to remove that chlorophyll, adding to the cost required to clarify the oil. (Read about this in the September 2015 Canola Digest article called “Top grade oil”.)

Will green seed go down in the dryer? Drying can shrivel up green immature seeds, which might seem to have a benefit, but it does not reduce the green in mature seed.

Will green content go down over time in storage? It may drop slightly in storage, but significant movement – enough to improve grade – is not likely. Make sure you have an accurate sample of grain entering the bin to check this. Read more.

What happens to green seed when it overwinters in the field? A Canadian Grain Commission (CGC) survey of samples from 106 fields that were harvested in the spring of 2020 found that “the main degrading factors for samples graded Canola No. 2 and No. 3 Canada were distinctively green seed (DGR) counts and the presence of other damages such as discoloration and rime”. See the Canola Watch article. The CGC quality report for canola harvested in spring 2017, the other recent year with a lot of overwintered canola, found no statistical difference in chlorophyll content for seeds harvested in the fall versus spring. See Table 4 here.

Green seed: What to do about it?
Most green seed issues result when heavy frost hits canola before the seeds mature. This permanently stops the chlorophyll-clearing process and locks in green. Nothing can be done to reduce…
High green: Will it clear?
Frost stops the chlorophyll-clearing process in canola seed — usually permanently. High green counts are likely in fields that were not fully mature when the heavy frost hit last week.…
Still lots of green? It might not clear
Canola that still has a lot of green seed might not de-green that much further. Green may have been locked in by frost and if more de-greening was possible, it…
Grading for green: Two limes don't make a green
Growers with canola downgraded for green and other factors may benefit from knowing the grading rules. The Canadian Grain Commission’s Official Grain Grading Guide says: •    No.1 canola may contain…