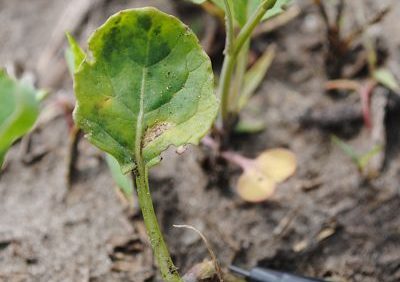 Growers face many weed, insect and disease management decisions throughout a growing season. In many cases, these applications provide a clear return on investment. In other cases, they do not. Here are a few examples where applications have a very low chance of providing a return.

Second in-crop herbicide applications. Early weed control provides a very good return on investment. For canola, a preseed burnoff and one early in-crop is often all the weed control required. As long as these two applications are preformed and as long as canola plant populations are on target, the crop should provide enough ground cover to outcompete the weeds. Second in-crop applications may make the crop look “cleaner” but they rarely provide an economic return, and the weeds left to escape do not contribute significantly to weed seed banks.* And if made past the recommended leaf staging of the crop, the second application can actually injure the crop enough to reduce yields. The few weeds that do emerge after the first pass also serve to confuse cabbage root maggot flies, reducing their egg laying and resultant damage from maggot infestation.

Fungicide for blackleg. Blackleg that infects early is most likely to cause economic yield loss later in the season. It stands to reason, you’d think, that a fungicide application at the 2-4 leaf stage to management blackleg would provide a solid return on investment. However, AAFC trials performed over the past few years do not show an economic benefit to early-season fungicides for blackleg control except with susceptible crops under high blackleg pressure.

Insecticides tank mixed with herbicide. These insecticide applications may do more harm than good. Hey, if flea beetle feeding has reached the action threshold of 25% leaf area loss and the first in-crop herbicide application has not yet occurred, mixing herbicide and insecticide in one application makes economic sense. But the ideal economic herbicide timing often occurs before flea beetle control is warranted, and holding off herbicide until flea beetle feeding gets serious could be costly. For any other target insect, damage is rarely enough to justify a spray that early in the season. Or, in the case of cutworms, target sprays as opposed to full field coverage are often enough.

It may only cost a few dollars an acre to add an insecticide to the herbicide tank mix, but that cost comes right off your profit margin if there are no insects worth controlling. This could have further repercussions because:

—Low level insect feeding can actually increase yields.**
—Unneeded sprays damage beneficial insects. While the economic benefit of beneficials has not been quantified, we know that they can stop threats from escalating, and may prevent the need for sprays later in the season. One good example is the Diadegma insulare parastitic wasp and diamondback moth. During large influx years like 2003 and 2005, growers were spared millions of dollars on millions of acres, as parasitism rates of the diamondback larvae reached into the 90%+ range. Likewise in Quebec, cabbage seedpod weevil damage seems to be kept in check by the Tricomalus perfectus wasp.
—Some insects, like bertha armyworm, have a density dependence that can trigger and spread biological controls that keep the population in check naturally. We’ve never sprayed a bertha outbreak away. Their numbers are controlled by parasitoids, viruses, and fungi. Spraying before threshold numbers could theoretically prolong an outbreak.
—Many insecticide can be applied only once per season. Using them when thresholds do not suggest an economic return may negate their use later in the season when they really are needed.

Insect economic thresholds represent the break even point for an insecticide spray. If insect counts are at the threshold, yield benefit from an insecticide spray will be enough to cover the product and application cost of the spray — that’s it. When insect numbers rise above the threshold, there will be a return on investment. Thresholds are adjusted based on value of the crop, and total cost of the application.

*Here is a link to the abstract of the AAFC study that demonstrated how a second in-crop application in HT canola may not provide an economic return. The article is in Weed Technology 2006, and the title is “Comparison of a Glyphosate-Resistant Canola (Brassica napus L.) System with Traditional Herbicide Regimes”.

Think profit when you think pest management
Latest News
Second in-crop herbicide applications, fungicide applications to prevent blackleg, and insecticides tank-mixed with herbicide are three pest management situations where economic returns may not add up. “These applications may slightly…
Seeding-time decisions to improve profit
Market and environmental challenges often have farmers reviewing ways to best-manage inputs to improve profits. Here are common agronomy practices that can greatly influence crop profitability. Canola growers have four…
20 agronomy tips to improve sustainability
Economic and environmental sustainability often go together. Here are 20 tips from the Canola Digest Science Edition 2018 that can help a farm increase profits while improving pest management, fertilizer…
Strategies to improve weed control in canola
Weeds are coming up strong. As part of the Canola Council of Canada’s Keep It Clean campaign, we remind growers to use only registered pesticides when required. Refer to product…