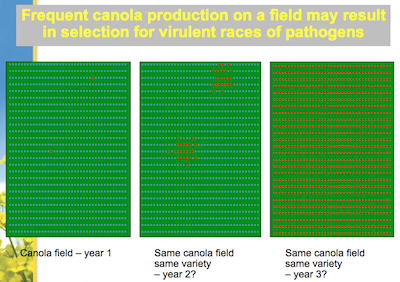 Dr. Stephen Strelkov continues to study the clubroot samples collected in 2013, to see whether these new strains are virulent on all clubroot resistant varieties. Research indicates that the Pioneer Hi-Bred and Monsanto sources of clubroot resistance appear to be different from each other in the lab and field, but we currently do not have enough information to make conclusions about other varieties.

In the longer term, development of additional resistance genes or cross licensing among seed companies could allow for stacking of resistance traits, which substantially lowers the risk of selecting for a pathotype that can overcome the resistance. Seed companies already have a history of cross licensing traits to battle soybean cyst nematode and in stacking Roundup Ready and Liberty Link traits to maintain the effectiveness of herbicide tolerance systems, to give two examples.

Short of a stacked genetics solution and/or the development of several more distinct sources of resistance, which could take a lot of time and effort, we need to follow the risk mitigation practices to help prevent clubroot spread and protect this valuable genetic trait.

1. Crop rotation. Canola grown in longer rotations will reduce the selection pressure on the clubroot pathogen, especially in fields with a high clubroot spore load. This will reduce the risk of selecting for pathogens that will overcome genetic resistance. Under prairie conditions, the half-life of the resting spores has been estimated at about 4.4 years (Hwang et al, 2009), although there is evidence that a large proportion of the resting spore population dies off in the first two years after canola (Peng et al).

3. Grow R varieties if clubroot is a concern in your area, even if you haven’t found clubroot in your fields. Growing resistant varieties in areas with low levels of clubroot is a good way to keep clubroot levels low. If growers wait for clubroot to show up before choosing R varieties, the selection pressure for new virulent pathotypes is literally millions of times higher than if growers begin using R varieties before the disease shows up. There is currently not enough seed available to use it everywhere across the Prairies, but planting clubroot-resistant varieties on fields with no history of this disease can be useful when clubroot has been confirmed nearby.

4. Scout. Growers using clubroot resistant varieties should scout their fields regularly to see if there is any evidence of the resistance breaking down. If the field is known to be infested with clubroot, then scouting should be very thorough before or during swathing. “Thorough” means examining the whole field to measure if there is an indication of pathotype shift, which will have a large impact on the future use of canola on that field. If the field is not known to be infested with clubroot, then scouting near the field entry points should occur once near the end of the growing season.

Note that a bag of clubroot-resistant seed will include some off types that may not have the clubroot resistance gene. These plants will be evenly distributed throughout the field. Instead, look for patches of clubroot-infected plants. In fields planted to a resistant variety, these patches may indicate the presence of a new virulent pathotype. While scouting, observe the location of the plants. Infested plants outside the seedrow could be susceptible volunteers.

5. Limit soil movement from field to field. Preventing spread of the disease is important in the long term control of this disease — even with clubroot resistant varieties. Sanitation practices are essential for fields known to be infested with clubroot, and important to ensure that areas without clubroot do not become infested as well. Sanitize your own equipment between fields, and if you hire custom operators for any job make sure you ask about their sanitation protocols. If you purchase used equipment from clubroot infested regions, make sure it is thoroughly cleaned and sanitized before it gets to your farm.

6. Manage weeds. Control of canola volunteers and other weeds that act as hosts for clubroot will be essential to keep the selection pressure low by not allowing the disease to build-up in the non-canola years.

Clubroot: When genetic resistance no longer works…
…The best management option left is the four-year rotation. Discovery of different clubroot pathotypes in central Alberta will change the rotation plans for some growers. No current varieties have strong…
Blackleg resistance vs. clubroot resistance
Growing clubroot resistant varieties in areas with low levels of inoculum or areas beside regions known to have clubroot is a good pre-emptive strategy to keep clubroot to a minimum…
Seed decision: What clubroot resistance to choose?
Canola growers should use clubroot-resistant (CR) canola varieties and extend their rotation to canola once every three years. But which CR variety should they use? The list of CR canola…
Clubroot resistance breakdown confirmed over a wide area in Alberta
Erosion of clubroot resistance is showing up in fields across central Alberta. Recent research by Alberta Agriculture and Rural Development (AARD) and the University of Alberta (U of A) has…