Home / Canola Watch / Hold back the economic clap from clubroot 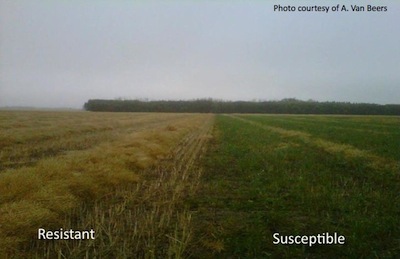 Clubroot lowers the bottom line for more and more Western Canada canola growers each year. The disease has been advancing through Alberta at a fairly steady 20 to 25 km per year, and has been detected at low levels in Manitoba and Saskatchewan. All fields on the Prairies are at risk of economic loss from clubroot, with the highest risk fields those that are (1) in known clubroot areas and (2) whose owners are currently doing very little, if anything, to prevent or manage the disease.

These are the fields that “suddenly” experience an extensive infection of plants by clubroot — say, for example, on 25% of the field, or more. In fact, clubroot was building up in that field, likely over two or more canola rotation cycles, and could have been detected earlier with proper scouting and then managed without such a huge economic loss.

A long wet spring this year could add to this worst case scenario. Muddy field equipment greatly increases the spread of clubroot-infested soil. And a late spring increases the time pressure, which means growers may not want to take the time to sanitize equipment between fields.

Resistance risk, quantified. If growers wait for clubroot to show up before choosing R varieties, the selection pressure for resistance breakdown is literally millions of times higher than if growers begin using R varieties before the disease shows up. (See “The math of risk” below.) Short rotation also increases the risk. Growing canola every second year has twice the risk of selecting for resistance breakdown than growing canola every fourth year.

Using R varieties on non-infested land will not contribute to the breakdown of a resistance trait. In fact, R varieties are an ideal choice for those fields without clubroot that are situated in areas known to have clubroot.

High pH will not save you. There are clubroot infested fields in Alberta with high soil pH. Manitoba has high pH relative to most other parts of the Prairies, and clubroot has been detected on canola in Manitoba and is expected to continue to advance throughout the province. High pH only slightly lessens the severity of clubroot. Moisture will override any potential benefit from higher pH.

The risk is not equal in all areas. The risk of economic loss from clubroot is higher in central Alberta than in Saskatchewan or Manitoba — for now. Management steps taken now will help keep it that way for longer.

What increases the risk? Growing canola in areas with a lot of canola production, and a long history of canola production. Moisture at seedling stage. Presence of clubroot in area – within 50-100 km, the risk begins to increase. Oil patch activity in the area, especially new leases and seismic exploration. Land exposed to public access of any kind. Custom seeding, spraying, harvesting.

Buy clean equipment. When buying used or demo’ed equipment from a high risk area have it cleaned at the point of purchase, and then sanitize it again once it gets to the farm. Seeding, harvest, tillage, manure, hay, livestock, construction, and recreation vehicles, etc., that originate from high risk areas can import this pathogen to your land.

Test suspect fields. Growers can have soil or suspicious plant roots (canola, mustard related weeds) tested for clubroot if they suspect a problem area or if they’re leasing new land and want to make sure. A list of labs.

The math of risk

Suppose a newly infested piece of soil has Plasmodiophora brassicae spores at a concentration of 1,000 spores/g. And a highly infested soil near Edmonton at 1,000,000,000 spores/g.

But in fields with low spore levels, perhaps in southern Alberta or in Saskatchewan and Manitoba, there is not likely any spores capable of overcoming resistance in that gram of soil. One would need 1,000 g of soil just to find one spore, and therefore would need a 1,000 kg of this lightly infested soil to have the same risk as the one gram of soil near Edmonton. That’s a 1,000,000-fold difference.

Therefore, the use of clubroot resistant varieties in these low incidence areas would not face a significant risk of being overcome — the risk is low. But this does illustrate the need to be continually changing the type of resistance genes to prevent these new pathotypes of P. brassicae from building up too much. This risk of resistance being lost in these highly infested soils is literally millions of times greater than lowly infested soils. So growers in the regions around Edmonton really need to scout carefully and rotate resistance genes. And grow canola less frequently on any highly infested soils.

Blackleg resistance vs. clubroot resistance
Growing clubroot resistant varieties in areas with low levels of inoculum or areas beside regions known to have clubroot is a good pre-emptive strategy to keep clubroot to a minimum in a particular field. The question for growers in areas with serious blackleg is whether to grow varieties with effective blackleg resistance or grow varieties…
Clubroot: When genetic resistance no longer works…
…The best management option left is the four-year rotation. Discovery of different clubroot pathotypes in central Alberta will change the rotation plans for some growers. No current varieties have strong resistance to these pathotypes. If growers have used resistant canola two or three times already on fields that were moderately to highly infested with clubroot,…
Clubroot resistance breakdown confirmed over a wide area in Alberta
Erosion of clubroot resistance is showing up in fields across central Alberta. Recent research by Alberta Agriculture and Rural Development (AARD) and the University of Alberta (U of A) has confirmed the continued spread, with multiple virulent pathotypes suspected. Some fields risk losing their ability to grow canola profitably until new genetic solutions or other…
Equipment sanitation is first line of defense to help prevent spread of different clubroot pathotype
Latest News
June 17, 2014– Research has confirmed the presence of a different clubroot pathotype in the Edmonton region that can overcome current forms of clubroot resistance. Earlier this year, Dr. Stephen Strelkov at the University of Alberta investigated samples collected from several fields and verified higher levels of infection than expected in some clubroot resistant varieties.…